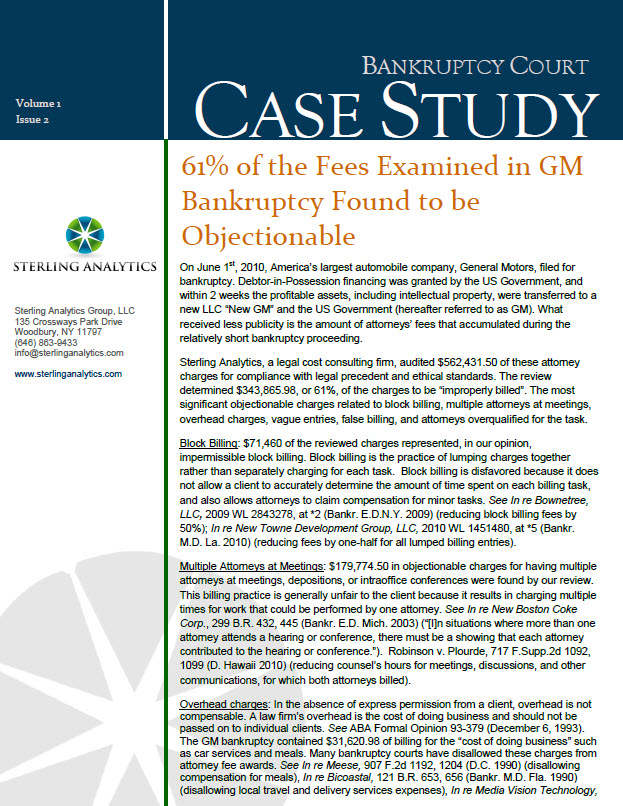 On June 1st, 2010, America’s largest automobile company, General Motors, filed for bankruptcy. Debtor-in-Possession financing was granted by the US Government, and within 2 weeks the profitable assets, including intellectual property, were transferred to a new LLC “New GM” and the US Government (hereafter referred to as GM). What received less publicity is the amount of attorneys’ fees that accumulated during the relatively short bankruptcy proceeding.

Sterling Analytics, a legal cost consulting firm, audited $562,431.50 of these attorney charges for compliance with legal precedent and ethical standards. The review determined $343,865.98, or 61%, of the charges to be “improperly billed”. The most significant objectionable charges related to block billing, multiple attorneys at meetings, overhead charges, vague entries, false billing, and attorneys overqualified for the task.

Block Billing: $71,460 of the reviewed charges represented, in our opinion, impermissible block billing. Block billing is the practice of lumping charges together rather than separately charging for each task. Block billing is disfavored because it does not allow a client to accurately determine the amount of time spent on each billing task, and also allows attorneys to claim compensation for minor tasks. See In re Bownetree, LLC, 2009 WL 2843278, at *2 (Bankr. E.D.N.Y. 2009) (reducing block billing fees by 50%); In re New Towne Development Group, LLC, 2010 WL 1451480, at *5 (Bankr. M.D. La. 2010) (reducing fees by one-half for all lumped billing entries).

Multiple Attorneys at Meetings: $179,774.50 in objectionable charges for having multiple attorneys at meetings, depositions, or intraoffice conferences were found by our review. This billing practice is generally unfair to the client because it results in charging multiple times for work that could be performed by one attorney. See In re New Boston Coke Corp., 299 B.R. 432, 445 (Bankr. E.D. Mich. 2003) (“[I]n situations where more than one attorney attends a hearing or conference, there must be a showing that each attorney contributed to the hearing or conference.”). Robinson v. Plourde, 717 F.Supp.2d 1092, 1099 (D. Hawaii 2010) (reducing counsel’s hours for meetings, discussions, and other communications, for which both attorneys billed).

Overhead charges: In the absence of express permission from a client, overhead is not compensable. A law firm’s overhead is the cost of doing business and should not be passed on to individual clients. See ABA Formal Opinion 93-379 (December 6, 1993). The GM bankruptcy contained $31,620.98 of billing for the “cost of doing business” such as car services and meals. Many bankruptcy courts have disallowed these charges from attorney fee awards. See In re Meese, 907 F.2d 1192, 1204 (D.C. 1990) (disallowing compensation for meals), In re Bicoastal, 121 B.R. 653, 656 (Bankr. M.D. Fla. 1990) (disallowing local travel and delivery services expenses), In re Media Vision Technology, 913 F.Supp. 1362, 1371-72 (N.D.Cal.1996) (disallowing word processing expenses), In re Theopholis Thacker, 48 B.R. 161, 164 (N.D.Ill.1985) (holding overhead includes telephone expense, and the local commuting and meal expenses of employees). Montgomery v. Aetna Plywood, Inc., 231 F.3d 399, 409 (7th Cir. 2000) (“Computer research charges are considered a form of attorney’s fees [citation omitted]…. [since] computer-assisted legal research essentially raises an attorney’s average hourly rate as it reduces (at least in theory) the number of hours that must be billed.”)

Vague billing entries: Vague billing entries are arguably impermissible because they prevent the client from adequately determining what work was performed and whether the charges fairly reflect the work described. $23,402 of the reviewed charges were found to be “overly vague”. Examples of such “vague” entries include “review of case status”, “follow sale hearing” and “attn. to retention issues”. Bills containing “vague” entries are “routinely disallowed” by bankruptcy courts. In re Hirsch, 2008 WL 5234057, at *7 (Bankr. E.D.N.Y. 2008). See also In re Baker, 374 B.R. 489 (E.D.N.Y. 2007) (reducing vague billing entries by 30%). Green v. City of New York, 2009 WL 3088419 at 6 (E.D.N.Y. 2009) (“Where billing records are vague, a reduction in fees is…appropriate… ‘Although counsel is not ‘required to record in great detail how each minute of his time was expended…counsel should [at a minimum] identify the general subject matter of his time expenditures.’’” quoting Marisol A. v. Giuliani, 111 F. Supp.2d 381, 396-97 (S.D.N.Y. 2000))

False billing: The review of the bills uncovered a total of $16,610.50 of objectionable “false” billing charges. In multiple billing entries, two attorneys billing for what appeared to be the same conference billed different hours for that conference. “False” billing is clearly an impermissible billing practice because it violates ethical rules. See Model Rules of Professional Conduct 1.5.

Billing by an attorney overqualified for task: The review of the bills found $9,577.50 of entries where attorneys who were seemingly overqualified for a task billed at their normal rate. Entries such as “assemble materials” or “update calendar” are not typically legal tasks that attorneys are authorized to bill for. Tucker v. City of New York, 704 F. Supp. 2d 347, 356 (S.D.N.Y. 2010) (“A further problem is found in a number of entries that reflect attorneys performing work that can be done by a clerical person or at most a paralegal. This includes such work as the copying and mailing of pleadings or other documents, the Bates-stamping of documents, the filing of papers, and the service of pleadings.”)