Attorney’s Use of Quarter-Hour Billing Increments Results in a 7.5% Fee Reduction 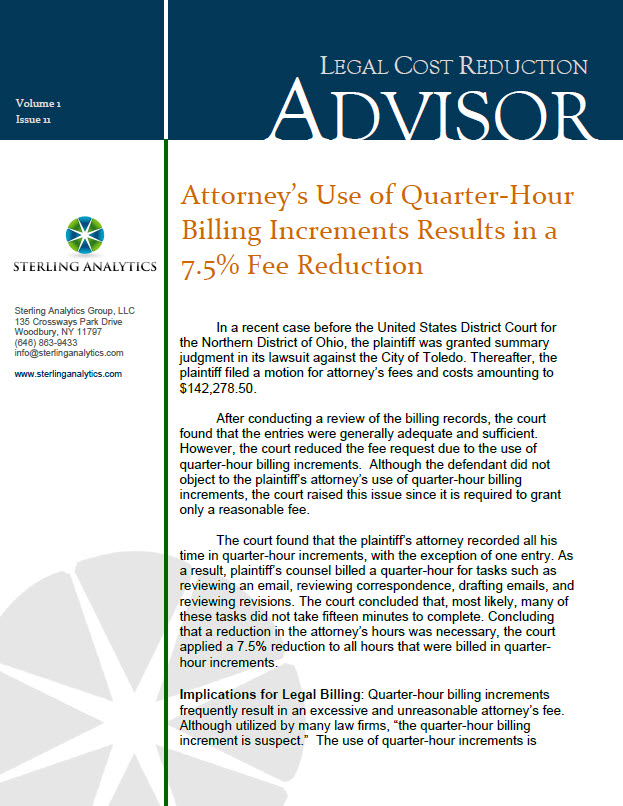 In a recent case before the United States District Court for the Northern District of Ohio, the plaintiff was granted summary judgment in its lawsuit against the City of Toledo. Thereafter, the plaintiff filed a motion for attorney’s fees and costs amounting to $142,278.50.

After conducting a review of the billing records, the court found that the entries were generally adequate and sufficient. However, the court reduced the fee request due to the use of quarter-hour billing increments. Although the defendant did not object to the plaintiff’s attorney’s use of quarter-hour billing increments, the court raised this issue since it is required to grant only a reasonable fee.

The court found that the plaintiff’s attorney recorded all his time in quarter-hour increments, with the exception of one entry. As a result, plaintiff’s counsel billed a quarter-hour for tasks such as reviewing an email, reviewing correspondence, drafting emails, and reviewing revisions. The court concluded that, most likely, many of these tasks did not take fifteen minutes to complete. Concluding that a reduction in the attorney’s hours was necessary, the court applied a 7.5% reduction to all hours that were billed in quarter-hour increments.