A Picture’s Worth a Thousand Words & $170,000 in Legal Fees: Judge Reduces Fees by $30,000 in Copyright Suit for Objectionable Billing Entries 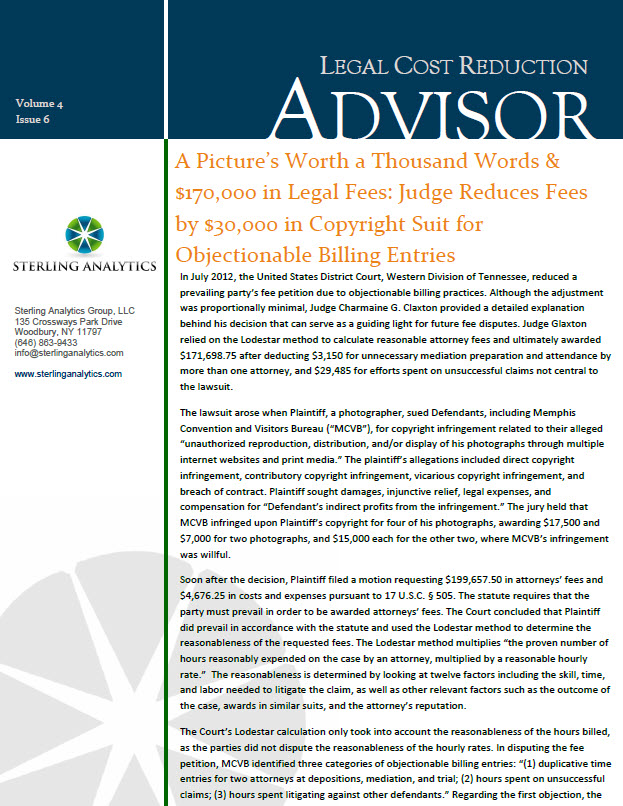 In July 2012, the United States District Court, Western Division of Tennessee, reduced a prevailing party’s fee petition due to objectionable billing practices. Although the adjustment was proportionally minimal, Judge Charmaine G. Claxton provided a detailed explanation behind his decision that can serve as a guiding light for future fee disputes. Judge Glaxton relied on the Lodestar method to calculate reasonable attorney fees and ultimately awarded $171,698.75 after deducting $3,150 for unnecessary mediation preparation and attendance by more than one attorney, and $29,485 for efforts spent on unsuccessful claims not central to the lawsuit.

Soon after the decision, Plaintiff filed a motion requesting $199,657.50 in attorneys’ fees and $4,676.25 in costs and expenses pursuant to 17 U.S.C. § 505. The statute requires that the party must prevail in order to be awarded attorneys’ fees. The Court concluded that Plaintiff did prevail in accordance with the statute and used the Lodestar method to determine the reasonableness of the requested fees. The Lodestar method multiplies “the proven number of hours reasonably expended on the case by an attorney, multiplied by a reasonable hourly rate.” The reasonableness is determined by looking at twelve factors including the skill, time, and labor needed to litigate the claim, as well as other relevant factors such as the outcome of the case, awards in similar suits, and the attorney’s reputation.

The Court’s Lodestar calculation only took into account the reasonableness of the hours billed, as the parties did not dispute the reasonableness of the hourly rates. In disputing the fee petition, MCVB identified three categories of objectionable billing entries: “(1) duplicative time entries for two attorneys at depositions, mediation, and trial; (2) hours spent on unsuccessful claims; (3) hours spent litigating against other defendants.” Regarding the first objection, the Court reduced the fees by $3,150 because Plaintiff failed to demonstrate why both attorneys were needed for preparation for and attendance at the mediation. Regarding MCVB’s second objection, the court held that “the multiple copyright-infringement claims were not sufficiently distinct to render Plaintiff’s request for attorneys’ fees unreasonable” because “much of the preparation would have been the same regardless of precisely which photos were at issue.” However, the Court did reduce the Plaintiff’s requested fees by $29,485. This amount represented the portion of the fees billed pertaining only to the claims for the photos where no copyright infringement was found. Regarding MCVB’s third and final objection, the court removed $8,905, or half the total fees related to the motion for summary judgment.

Implications for Legal Billing: Judge Claxton’s ruling reaffirms industry standards regardingobjectionable billing practices such as having multiple attorneys prepare for and attend depositions, hearing, and mediations. The ruling also demonstrates an effective use of the Lodestar method to calculate reasonable attorney fees.

In addition, a key point of interest in this case is the Court’s discussion of how to award attorney fees when the party does not prevail on every claim alleged. Here, the judge deducted numerous hours billed for unsuccessful claims, specifically, time dedicated to claims for the two photographs where no copyright infringement was found. Accordingly, this decision, and others like it, should encourage attorneys to avoid frivolous allegations, and dedicate the bulk of their time to claims more likely to be meritorious.