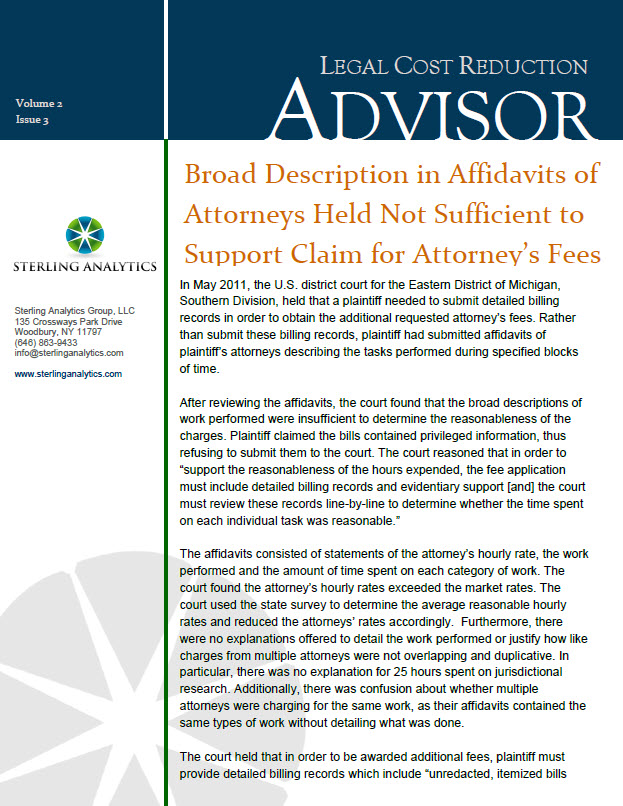 In May 2011, the U.S. district court for the Eastern District of Michigan, Southern Division, held that a plaintiff needed to submit detailed billing records in order to obtain the additional requested attorney’s fees. Rather than submit these billing records, plaintiff had submitted affidavits of plaintiff’s attorneys describing the tasks performed during specified blocks of time.

After reviewing the affidavits, the court found that the broad descriptions of work performed were insufficient to determine the reasonableness of the charges. Plaintiff claimed the bills contained privileged information, thus refusing to submit them to the court. The court reasoned that in order to “support the reasonableness of the hours expended, the fee application must include detailed billing records and evidentiary support [and] the court must review these records line-by-line to determine whether the time spent on each individual task was reasonable.

The affidavits consisted of statements of the attorney’s hourly rate, the work performed and the amount of time spent on each category of work. The court found the attorney’s hourly rates exceeded the market rates. The court used the state survey to determine the average reasonable hourly rates and reduced the attorneys’ rates accordingly. Furthermore, there were no explanations offered to detail the work performed or justify how like charges from multiple attorneys were not overlapping and duplicative. In particular, there was no explanation for 25 hours spent on jurisdictional research. Additionally, there was confusion about whether multiple attorneys were charging for the same work, as their affidavits contained the same types of work without detailing what was done.

The court held that in order to be awarded additional fees, plaintiff must provide detailed billing records which include “unredacted, itemized bills showing the work performed by task (without block billing), the time spent, and the attorney who performed the task.”

Implications for Legal Billing: Many fee petitions fail to include sufficient billing detail to reasonably allow the Court and opponents to determine whether a fee petition is fair. The lack of billing records denies the court the opportunity to review the work done by counsel. Detailed billing records may reveal impermissible billing practices, such as block billing and multiple attorneys at meetings. For example, the affidavits were unclear as to whether the attorneys were charging for the same meetings, and such determination was necessary to assess the reasonableness of the fees. A review of billing entries can lead to a reduction in legal fees if impermissible billing practices are found.