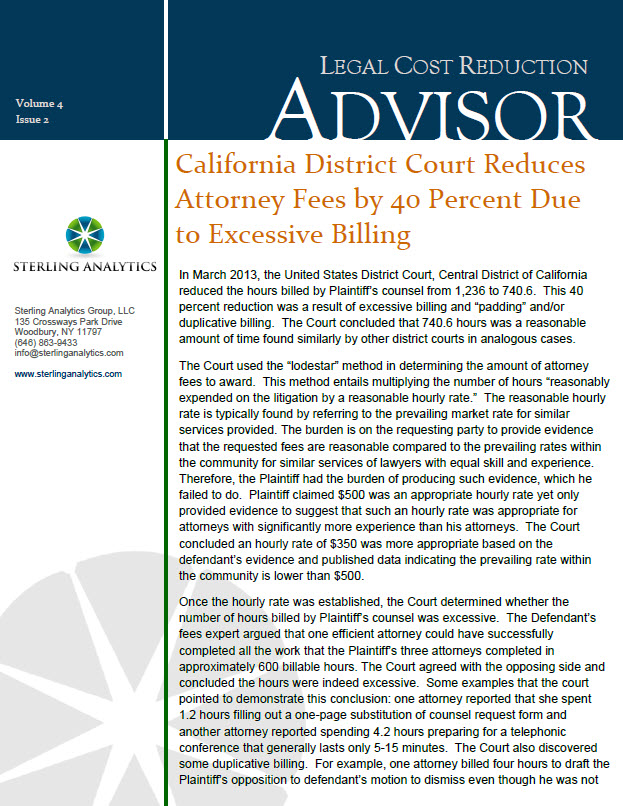 In March 2013, the United States District Court, Central District of California reduced the hours billed by Plaintiff’s counsel from 1,236 to 740.6. This 40 percent reduction was a result of excessive billing and “padding” and/or duplicative billing. The Court concluded that 740.6 hours was a reasonable amount of time found similarly by other district courts in analogous cases.

The Court used the “lodestar” method in determining the amount of attorney fees to award. This method entails multiplying the number of hours “reasonably expended on the litigation by a reasonable hourly rate.” The reasonable hourly rate is typically found by referring to the prevailing market rate for similar services provided. The burden is on the requesting party to provide evidence that the requested fees are reasonable compared to the prevailing rates within the community for similar services of lawyers with equal skill and experience. Therefore, the Plaintiff had the burden of producing such evidence, which he failed to do. Plaintiff claimed $500 was an appropriate hourly rate yet only provided evidence to suggest that such an hourly rate was appropriate for attorneys with significantly more experience than his attorneys. The Court concluded an hourly rate of $350 was more appropriate based on the defendant’s evidence and published data indicating the prevailing rate within the community is lower than $500.

Once the hourly rate was established, the Court determined whether the number of hours billed by Plaintiff’s counsel was excessive. The Defendant’s fees expert argued that one efficient attorney could have successfully completed all the work that the Plaintiff’s three attorneys completed in approximately 600 billable hours. The Court agreed with the opposing side and concluded the hours were indeed excessive. Some examples that the court pointed to demonstrate this conclusion: one attorney reported that she spent 1.2 hours filling out a one-page substitution of counsel request form and another attorney reported spending 4.2 hours preparing for a telephonic conference that generally lasts only 5-15 minutes. The Court also discovered some duplicative billing. For example, one attorney billed four hours to draft the Plaintiff’s opposition to defendant’s motion to dismiss even though he was not the “managing partner” assigned to the matter. In the end, the actual managing partner drafted the final opposition, but both attorneys still billed for their time. The court held that the first attorney’s preparation of the pleading was duplicative.

After reviewing the time entries, the Court also discovered that the Plaintiff’s attorneys billed for paralegal and/or clerical work at attorney rates. For example, one attorney billed five hours preparing for a deposition, which included “organizing exhibits.” Such a task is more appropriately completed by a paralegal. The same attorney also billed an hour to prepare subpoenas, even though this is a task that is typically completed by a paralegal or secretary. Such instances of ineffective billing authorize a reduction in fees.

Implications for Legal Billing: The Court’s decision emphasizes the importance of accuracy when attorneys bill their hours. Attorneys are responsible for billing work that is appropriate for someone of their experience and level of expertise. Additionally, unless there is an exception, lawyers should only charge what is considered a comparable and reasonable hourly rate within the relevant market.

Excessive and redundant billing can easily be avoided by attorneys, as well as billing for secretarial and/or clerical tasks which are included in the firm’s overhead costs. Lawyers must aim to bill efficiently and in doing so they will be more productive and accurate in their performance of the work.