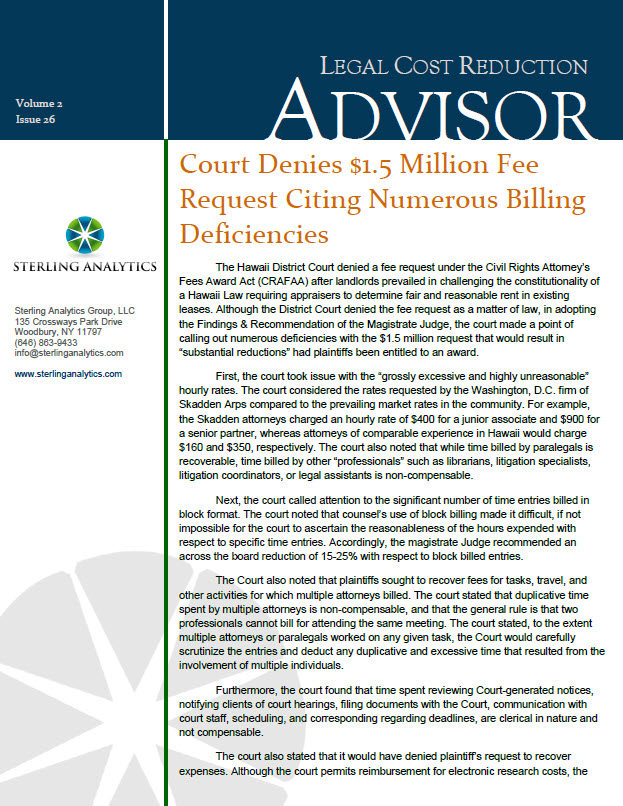 The Hawaii District Court denied a fee request under the Civil Rights Attorney’s Fees Award Act (CRAFAA) after landlords prevailed in challenging the constitutionality of a Hawaii Law requiring appraisers to determine fair and reasonable rent in existing leases. Although the District Court denied the fee request as a matter of law, in adopting the Findings & Recommendation of the Magistrate Judge, the court made a point of calling out numerous deficiencies with the $1.5 million request that would result in “substantial reductions” had plaintiffs been entitled to an award.

First, the court took issue with the “grossly excessive and highly unreasonable” hourly rates. The court considered the rates requested by the Washington, D.C. firm of Skadden Arps compared to the prevailing market rates in the community. For example, the Skadden attorneys charged an hourly rate of $400 for a junior associate and $900 for a senior partner, whereas attorneys of comparable experience in Hawaii would charge $160 and $350, respectively. The court also noted that while time billed by paralegals is recoverable, time billed by other “professionals” such as librarians, litigation specialists, litigation coordinators, or legal assistants is non-compensable.

Next, the court called attention to the significant number of time entries billed in block format. The court noted that counsel’s use of block billing made it difficult, if not impossible for the court to ascertain the reasonableness of the hours expended with respect to specific time entries. Accordingly, the magistrate Judge recommended an across the board reduction of 15-25% with respect to block billed entries.

Furthermore, the court found that time spent reviewing Court-generated notices, notifying clients of court hearings, filing documents with the Court, communication with court staff, scheduling, and corresponding regarding deadlines, are clerical in nature and not compensable.

The court also stated that it would have denied plaintiff’s request to recover expenses. Although the court permits reimbursement for electronic research costs, the plaintiffs failed to submit any receipts or invoices in support, even after requested. As such, the court determined that the request would have been denied. Similarly, although travel expenses are recoverable under the CRAFAA, the court found the plaintiff’s first class airfare and luxury accommodations unreasonable. Absent proof of some illness, disability, or other condition, discomfort alone is an insufficient basis for the exorbitant request. The court noted that while plaintiffs may agree to certain expenses, it does not follow that such expenses are necessarily recoverable.

Implications for Legal Billing: This case serves as a reminder that counsel should have a thorough understanding of the laws which grant entitlement to attorneys’ fees. The plaintiffs in this case sought fees, without distinguishing between prevailing parties and innocent parties, as required by the controlling statute. As a result, the court found they were entitled to no recovery at all.

Despite this finding, the court spoke at length about flaws within the plaintiffs’ fee request and improper billing practices. This reaction by the court reaffirms the increasing level of scrutiny courts will apply to fee requests, and their seeming frustration with seeing repeated improper billing practices. As always, unreasonable block billing and excessive or duplicative billing entries will be reduced by the court. Notably, the court in this case also narrowly defined compensable “professionals” as either attorneys or paralegals. Any other support professionals, such as litigation coordinators, may not charge hourly rates.

Finally, it is worth remembering that while parties may agree to cover certain fees and expenses, such costs may not be reasonable or necessary, or recoverable as a matter of law. The onus then, is on the parties to make sure they have a reasonable fee agreement in place, or risk being stuck with a massive bill at the end of the day.