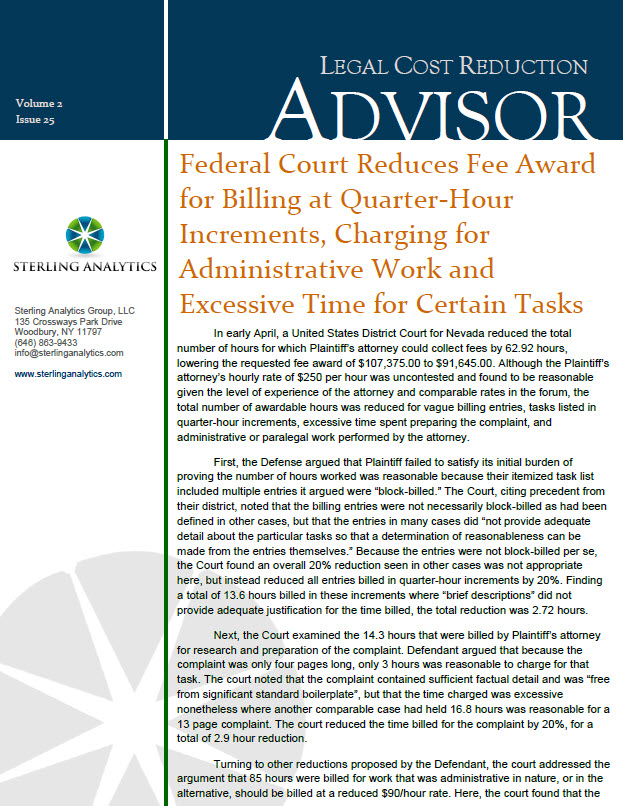 In early April, a United States District Court for Nevada reduced the total number of hours for which Plaintiff’s attorney could collect fees by 62.92 hours, lowering the requested fee award of $107,375.00 to $91,645.00. Although the Plaintiff’s attorney’s hourly rate of $250 per hour was uncontested and found to be reasonable given the level of experience of the attorney and comparable rates in the forum, the total number of awardable hours was reduced for vague billing entries, tasks listed in quarter-hour increments, excessive time spent preparing the complaint, and administrative or paralegal work performed by the attorney.

First, the Defense argued that Plaintiff failed to satisfy its initial burden of proving the number of hours worked was reasonable because their itemized task list included multiple entries it argued were “block-billed.” The Court, citing precedent from their district, noted that the billing entries were not necessarily block-billed as had been defined in other cases, but that the entries in many cases did “not provide adequate detail about the particular tasks so that a determination of reasonableness can be made from the entries themselves.” Because the entries were not block-billed per se, the Court found an overall 20% reduction seen in other cases was not appropriate here, but instead reduced all entries billed in quarter-hour increments by 20%. Finding a total of 13.6 hours billed in these increments where “brief descriptions” did not provide adequate justification for the time billed, the total reduction was 2.72 hours.

Next, the Court examined the 14.3 hours that were billed by Plaintiff’s attorney for research and preparation of the complaint. Defendant argued that because the complaint was only four pages long, only 3 hours was reasonable to charge for that task. The court noted that the complaint contained sufficient factual detail and was “free from significant standard boilerplate”, but that the time charged was excessive nonetheless where another comparable case had held 16.8 hours was reasonable for a 13 page complaint. The court reduced the time billed for the complaint by 20%, for a total of 2.9 hour reduction.

Turning to other reductions proposed by the Defendant, the court addressed the argument that 85 hours were billed for work that was administrative in nature, or in the alternative, should be billed at a reduced $90/hour rate. Here, the court found that the Plaintiff’s attorney was a sole practitioner, who performed all of the work by himself and did not have a paralegal to perform such tasks, and as such did not agree that reducing these hours to a $90/hour rate was appropriate. Instead, they decided to disallow certain specific tasks that did not involve legal expertise, were unnecessary, and were due to the attorney’s own carelessness. 2.6 hours were disallowed for delivering the complaint and summons to the process server, noting that “an attorney who chooses to personally perform these completely non-lawyer functions cannot expect to be separately paid for them, let alone at his professional hourly rate.” A reduction in 3 hours was found appropriate for an entry regarding correcting the exhibit list for trial, where the correction was necessary due to the attorney’s own mistake and negligence. Finally, the court disallowed 15.1 hours for preparation of summaries of deposition, whereas here the attorney took the depositions himself, and they were not numerous or lengthy as to require summaries.

Implications for Legal Billing: This decision reinforces the requirement for specificity in itemized billing lists, so that the reasonableness of the hours charged may easily be determined by the Court upon examination. Further, any task billed in quarter-hour increments will be assumed to be excessive and overcharged, and may be reduced across the board. In addition, attorneys may perform tasks that are secretarial or administrative in nature but generally will not be allowed to charge for hours spent on these tasks at their high attorney rate.