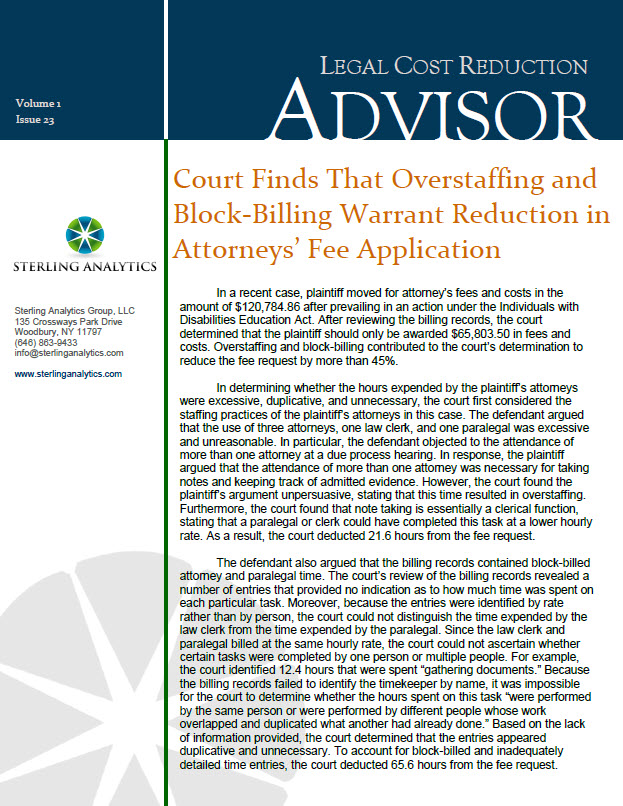 In a recent case, plaintiff moved for attorney’s fees and costs in the amount of $120,784.86 after prevailing in an action under the Individuals with Disabilities Education Act. After reviewing the billing records, the court determined that the plaintiff should only be awarded $65,803.50 in fees and costs. Overstaffing and block-billing contributed to the court’s determination to reduce the fee request by more than 45%.

In determining whether the hours expended by the plaintiff’s attorneys were excessive, duplicative, and unnecessary, the court first considered the staffing practices of the plaintiff’s attorneys in this case. The defendant argued that the use of three attorneys, one law clerk, and one paralegal was excessive and unreasonable. In particular, the defendant objected to the attendance of more than one attorney at a due process hearing. In response, the plaintiff argued that the attendance of more than one attorney was necessary for taking notes and keeping track of admitted evidence. However, the court found the plaintiff’s argument unpersuasive, stating that this time resulted in overstaffing. Furthermore, the court found that note taking is essentially a clerical function, stating that a paralegal or clerk could have completed this task at a lower hourly rate. As a result, the court deducted 21.6 hours from the fee request.

The defendant also argued that the billing records contained block-billed attorney and paralegal time. The court’s review of the billing records revealed a number of entries that provided no indication as to how much time was spent on each particular task. Moreover, because the entries were identified by rate rather than by person, the court could not distinguish the time expended by the law clerk from the time expended by the paralegal. Since the law clerk and paralegal billed at the same hourly rate, the court could not ascertain whether certain tasks were completed by one person or multiple people. For example, the court identified 12.4 hours that were spent “gathering documents.” Because the billing records failed to identify the timekeeper by name, it was impossible for the court to determine whether the hours spent on this task “were performed by the same person or were performed by different people whose work overlapped and duplicated what another had already done.” Based on the lack of information provided, the court determined that the entries appeared duplicative and unnecessary. To account for block-billed and inadequately detailed time entries, the court deducted 65.6 hours from the fee request.

In order to constitute a reasonable fee, billing entries must be adequately detailed. As a result, the time spent on each particular task must be provided. Block-billed time entries, i.e., entries that lump together time spent on multiple tasks, are not sufficient. Moreover, the name of the timekeeper must also be provided. A determination as to whether time was reasonably expended cannot be made where the person performing the task is not identified. Obviously, the actual task being performed must be sufficiently detailed as to enable the client to determine exactly what task was performed, who performed the task and for what purpose it was performed. Anything less than the foregoing will be grounds for reduction of the fee or elimination of the inadequately described hours.