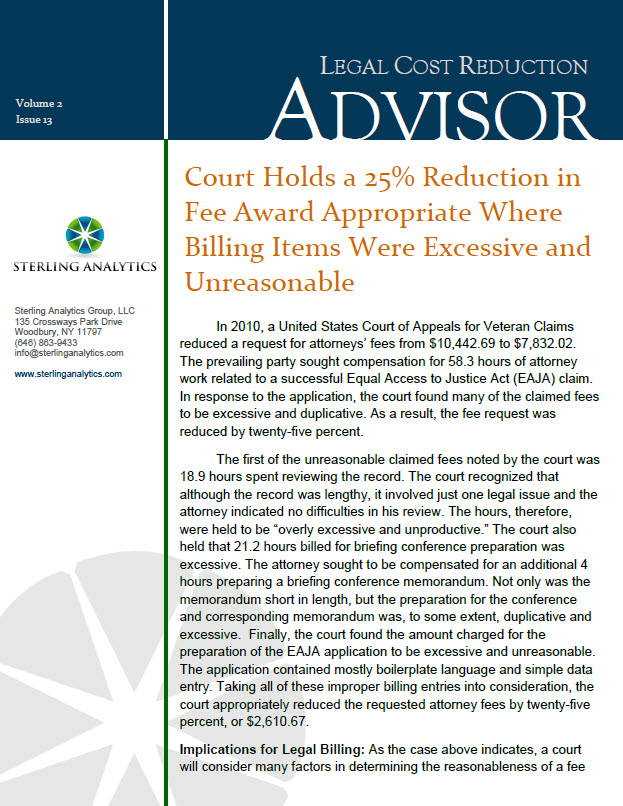 In 2010, a United States Court of Appeals for Veteran Claims reduced a request for attorneys’ fees from $10,442.69 to $7,832.02. The prevailing party sought compensation for 58.3 hours of attorney work related to a successful Equal Access to Justice Act (EAJA) claim. In response to the application, the court found many of the claimed fees to be excessive and duplicative. As a result, the fee request was reduced by twenty-five percent.

The first of the unreasonable claimed fees noted by the court was 18.9 hours spent reviewing the record. The court recognized that although the record was lengthy, it involved just one legal issue and the attorney indicated no difficulties in his review. The hours, therefore, were held to be “overly excessive and unproductive.” The court also held that 21.2 hours billed for briefing conference preparation was excessive. The attorney sought to be compensated for an additional 4 hours preparing a briefing conference memorandum. Not only was the memorandum short in length, but the preparation for the conference and corresponding memorandum was, to some extent, duplicative and excessive. Finally, the court found the amount charged for the preparation of the EAJA application to be excessive and unreasonable. The application contained mostly boilerplate language and simple data entry. Taking all of these improper billing entries into consideration, the court appropriately reduced the requested attorney fees by twenty-five percent, or $2,610.67.

Implications for Legal Billing: As the case above indicates, a court will consider many factors in determining the reasonableness of a fee award. The relevant factors applied in this case include whether the work performed was duplicative or if an attorney expends an excessive amount of time on regularly performed tasks. Both of these practices represent a lack of billing judgment and are unethical. An attorney should only charge for the hours reasonably expended on a task. Certain tasks will invariably take longer to complete than others. However, it was on this basis that the court above found the hours spent reviewing the record and preparing an application to be excessive and unreasonable. Seeking compensation for excessive hours spent on a task is unproductive for the attorney and the client and will result in a loss of compensation.