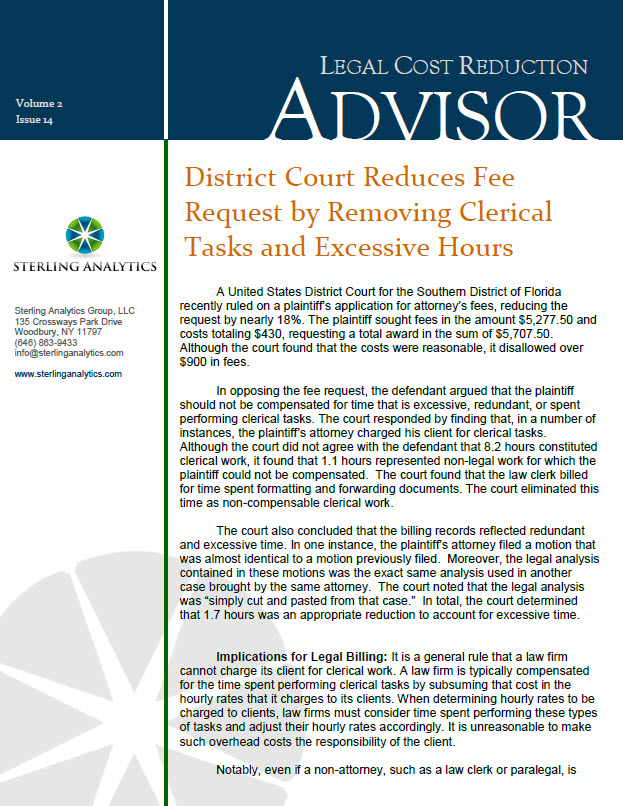 A United States District Court for the Southern District of Florida recently ruled on a plaintiff’s application for attorney’s fees, reducing the request by nearly 18%. The plaintiff sought fees in the amount $5,277.50 and costs totaling $430, requesting a total award in the sum of $5,707.50. Although the court found that the costs were reasonable, it disallowed over $900 in fees.

In opposing the fee request, the defendant argued that the plaintiff should not be compensated for time that is excessive, redundant, or spent performing clerical tasks. The court responded by finding that, in a number of instances, the plaintiff’s attorney charged his client for clerical tasks. Although the court did not agree with the defendant that 8.2 hours constituted clerical work, it found that 1.1 hours represented non-legal work for which the plaintiff could not be compensated. The court found that the law clerk billed for time spent formatting and forwarding documents. The court eliminated this time as non-compensable clerical work.

The court also concluded that the billing records reflected redundant and excessive time. In one instance, the plaintiff’s attorney filed a motion that was almost identical to a motion previously filed. Moreover, the legal analysis contained in these motions was the exact same analysis used in another case brought by the same attorney. The court noted that the legal analysis was “simply cut and pasted from that case.” In total, the court determined that 1.7 hours was an appropriate reduction to account for excessive time.

Implications for Legal Billing: It is a general rule that a law firm cannot charge its client for clerical work. A law firm is typically compensated for the time spent performing clerical tasks by subsuming that cost in the hourly rates that it charges to its clients. When determining hourly rates to be charged to clients, law firms must consider time spent performing these types of tasks and adjust their hourly rates accordingly. It is unreasonable to make such overhead costs the responsibility of the client.

Notably, even if a non-attorney, such as a law clerk or paralegal, is performing the clerical task at a reduced hourly rate, it is nonetheless unreasonable. Time expended performing clerical tasks should never be charged to the client, no matter who performs the task. Tasks such as photocopying, scanning, formatting, organizing and maintaining files are included in the category of non-compensable clerical work and should never be the client’s burden.

Unquestionably, an attorney is not permitted to be compensated twice for a task that has been performed only once. Thus, if an attorney has previously completed and billed for a task, the attorney cannot use that same exact product and charge the client as if he completed it from scratch. Doing so would result in the client being charged for work not actually performed. This type of practice is a clear violation of ethical rules.