Court Reduces Attorney Fee Award by Over $135,000 Due to Excessive, Unnecessary and Improper Charges 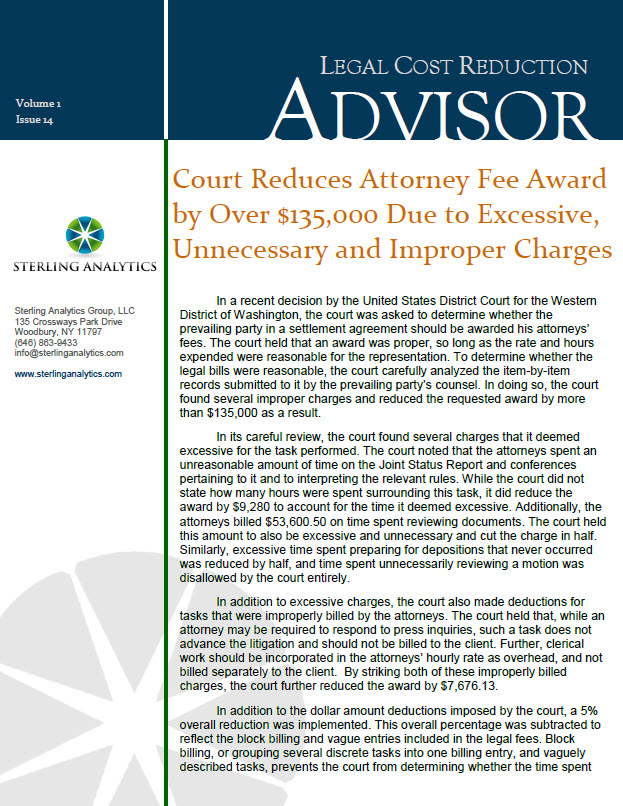 In a recent decision by the United States District Court for the Western District of Washington, the court was asked to determine whether the prevailing party in a settlement agreement should be awarded his attorneys’ fees. The court held that an award was proper, so long as the rate and hours expended were reasonable for the representation. To determine whether the legal bills were reasonable, the court carefully analyzed the item-by-item records submitted to it by the prevailing party’s counsel. In doing so, the court found several improper charges and reduced the requested award by more than $135,000 as a result.

In its careful review, the court found several charges that it deemed excessive for the task performed. The court noted that the attorneys spent an unreasonable amount of time on the Joint Status Report and conferences pertaining to it and to interpreting the relevant rules. While the court did not state how many hours were spent surrounding this task, it did reduce the award by $9,280 to account for the time it deemed excessive. Additionally, the attorneys billed $53,600.50 on time spent reviewing documents. The court held this amount to also be excessive and unnecessary and cut the charge in half. Similarly, excessive time spent preparing for depositions that never occurred was reduced by half, and time spent unnecessarily reviewing a motion was disallowed by the court entirely.

In addition to excessive charges, the court also made deductions for tasks that were improperly billed by the attorneys. The court held that, while an attorney may be required to respond to press inquiries, such a task does not advance the litigation and should not be billed to the client. Further, clerical work should be incorporated in the attorneys’ hourly rate as overhead, and not billed separately to the client. By striking both of these improperly billed charges, the court further reduced the award by $7,676.13.

In addition to the dollar amount deductions imposed by the court, a 5% overall reduction was implemented. This overall percentage was subtracted to reflect the block billing and vague entries included in the legal fees. Block billing, or grouping several discrete tasks into one billing entry, and vaguely described tasks, prevents the court from determining whether the time spent

was reasonable. Therefore, the court imposed this reduction to reflect these impermissible billing practices.

Implications for Legal Billing: Just as the court carefully analyzed the requested attorneys’ fees item-by-item, clients should similarly review the legal bills submitted to them. While the court has the authority to strike charges that are improper, a client can flag similar charges and discuss them with their attorneys. As this court holds, attorneys should not bill excessive amounts of time for simple tasks, for clerical work or publicity inquiries. By taking the time to conduct an item-by-item review, and detecting such impermissible charges, a client can find significant savings in his or her legal bills.

In addition, since block billing is such a common practice, it is wise to instruct attorneys, prior to beginning the representation, not to engage in this billing technique. This way, each task performed by the attorney will be clearly delineated, and it will be easier to review which charges are proper. Taking these steps to review legal bills carefully can potentially save clients a significant amount of money, as evidenced by this case.