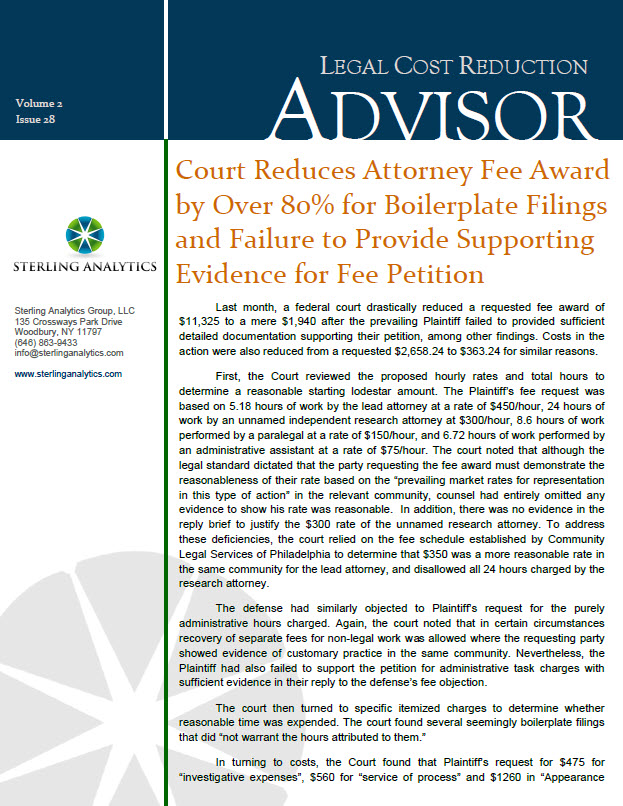 Last month, a federal court drastically reduced a requested fee award of $11,325 to a mere $1,940 after the prevailing Plaintiff failed to provided sufficient detailed documentation supporting their petition, among other findings. Costs in the action were also reduced from a requested $2,658.24 to $363.24 for similar reasons.

First, the Court reviewed the proposed hourly rates and total hours to determine a reasonable starting lodestar amount. The Plaintiff’s fee request was based on 5.18 hours of work by the lead attorney at a rate of $450/hour, 24 hours of work by an unnamed independent research attorney at $300/hour, 8.6 hours of work performed by a paralegal at a rate of $150/hour, and 6.72 hours of work performed by an administrative assistant at a rate of $75/hour. The court noted that although the legal standard dictated that the party requesting the fee award must demonstrate the reasonableness of their rate based on the “prevailing market rates for representation in this type of action” in the relevant community, counsel had entirely omitted any evidence to show his rate was reasonable. In addition, there was no evidence in the reply brief to justify the $300 rate of the unnamed research attorney. To address these deficiencies, the court relied on the fee schedule established by Community Legal Services of Philadelphia to determine that $350 was a more reasonable rate in the same community for the lead attorney, and disallowed all 24 hours charged by the research attorney.

The defense had similarly objected to Plaintiff’s request for the purely administrative hours charged. Again, the court noted that in certain circumstances recovery of separate fees for non-legal work was allowed where the requesting party showed evidence of customary practice in the same community. Nevertheless, the Plaintiff had also failed to support the petition for administrative task charges with sufficient evidence in their reply to the defense’s fee objection.

The court then turned to specific itemized charges to determine whether reasonable time was expended. The court found several seemingly boilerplate filings that did “not warrant the hours attributed to them.”

In turning to costs, the Court found that Plaintiff’s request for $475 for “investigative expenses”, $560 for “service of process” and $1260 in “Appearance Attorney’s Fees” were all insufficiently documented and supported by any explanation. Plaintiffs were only entitled to an award of the $350 filing fee and $13.24 in courier charges.

Implications for Legal Billing: This decision emphasizes the importance of providing sufficient documentation to support a request for fees. The information that a court may consider important when making a determination as to reasonableness of fees can include evidence of hourly rates customary in the relevant community for similar levels of experience and case difficulty. Likewise, a party petitioning the court for separate charges for an administrative assistance may be requested to provide evidence of precedent for courts within the same or similar jurisdictions awarding similar charges. Detailed documentation to support itemized costs may also be requested by the court to make a fair determination.

In addition, firms should be aware of charging excessive hours for seemingly boilerplate work. Where a court finds that a similar work product was used by the same firm in other cases of the same nature, they may reduce the number of hours charged if deemed unreasonable. The decision in this case also reaffirms that secretarial work charged at a high attorney billing rate will often be reduced to the extent appropriate to compensate for legal work alone.