New York Court Adopts Sterling Analytics’ Recommendation to Reduce Over $600,000 in a Fee Demand to $38,840 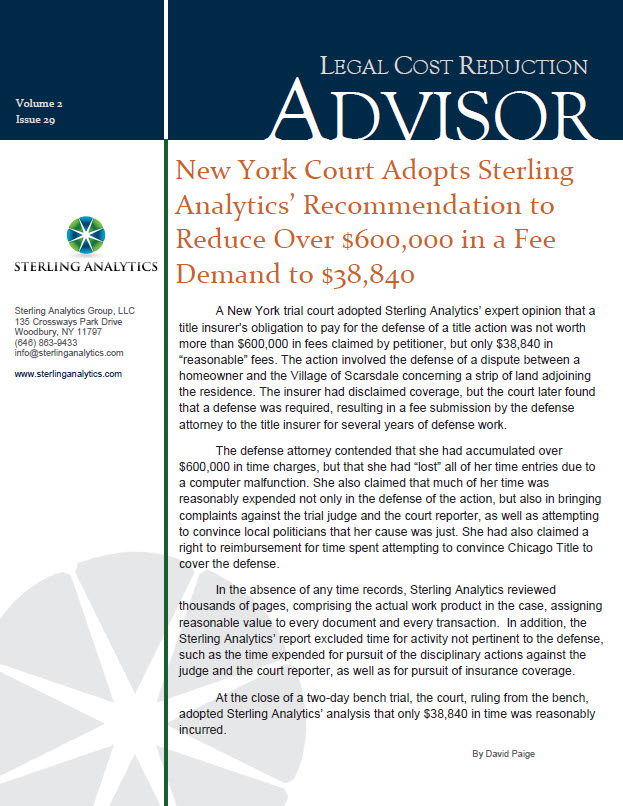 A New York trial court adopted Sterling Analytics’ expert opinion that a title insurer’s obligation to pay for the defense of a title action was not worth more than $600,000 in fees claimed by petitioner, but only $38,840 in “reasonable” fees. The action involved the defense of a dispute between a homeowner and the Village of Scarsdale concerning a strip of land adjoining the residence. The insurer had disclaimed coverage, but the court later found that a defense was required, resulting in a fee submission by the defense attorney to the title insurer for several years of defense work.

The defense attorney contended that she had accumulated over $600,000 in time charges, but that she had “lost” all of her time entries due to a computer malfunction. She also claimed that much of her time was reasonably expended not only in the defense of the action, but also in bringing complaints against the trial judge and the court reporter, as well as attempting to convince local politicians that her cause was just. She had also claimed a right to reimbursement for time spent attempting to convince Chicago Title to cover the defense.

In the absence of any time records, Sterling Analytics reviewed thousands of pages, comprising the actual work product in the case, assigning reasonable value to every document and every transaction. In addition, the Sterling Analytics’ report excluded time for activity not pertinent to the defense, such as the time expended for pursuit of the disciplinary actions against the judge and the court reporter, as well as for pursuit of insurance coverage.

At the close of a two-day bench trial, the court, ruling from the bench, adopted Sterling Analytics’ analysis that only $38,840 in time was reasonably incurred.