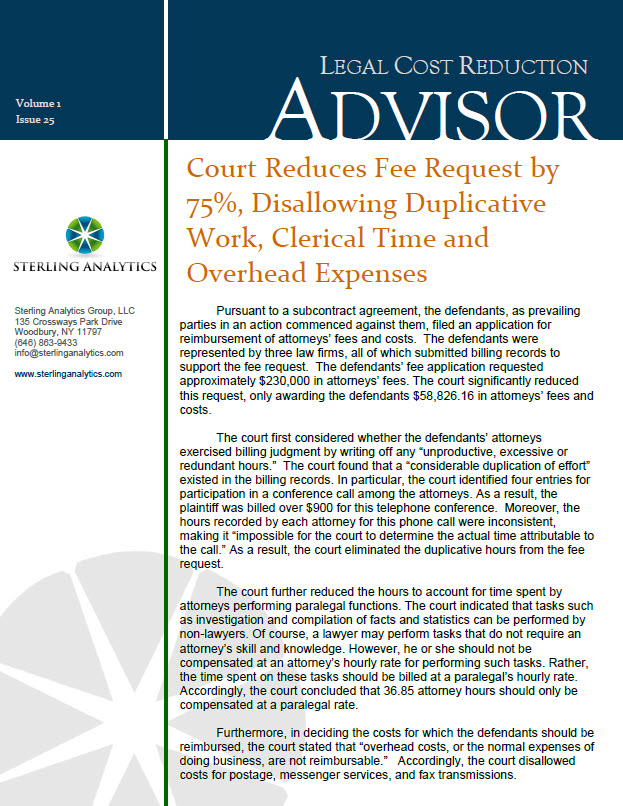 The court first considered whether the defendants’ attorneys exercised billing judgment by writing off any “unproductive, excessive or redundant hours.” The court found that a “considerable duplication of effort” existed in the billing records. In particular, the court identified four entries for participation in a conference call among the attorneys. As a result, the plaintiff was billed over $900 for this telephone conference. Moreover, the hours recorded by each attorney for this phone call were inconsistent, making it “impossible for the court to determine the actual time attributable to the call.” As a result, the court eliminated the duplicative hours from the fee request.

The court further reduced the hours to account for time spent by attorneys performing paralegal functions. The court indicated that tasks such as investigation and compilation of facts and statistics can be performed by non-lawyers. Of course, a lawyer may perform tasks that do not require an attorney’s skill and knowledge. However, he or she should not be compensated at an attorney’s hourly rate for performing such tasks. Rather, the time spent on these tasks should be billed at a paralegal’s hourly rate. Accordingly, the court concluded that 36.85 attorney hours should only be compensated at a paralegal rate.

Furthermore, in deciding the costs for which the defendants should be reimbursed, the court stated that “overhead costs, or the normal expenses of doing business, are not reimbursable.” Accordingly, the court disallowed costs for postage, messenger services, and fax transmissions.

Attorneys should also reduce hourly rates where time is spent performing non-legal work. It is inappropriate to charge an attorney’s hourly rate for a task that does not require an attorney’s skill. If the task is one which a paralegal would typically perform, it should be charged at a paralegal rate. This is true even where an attorney performs the work. As noted by the court, “the dollar value of work performed is not enhanced just because a lawyer does it.”