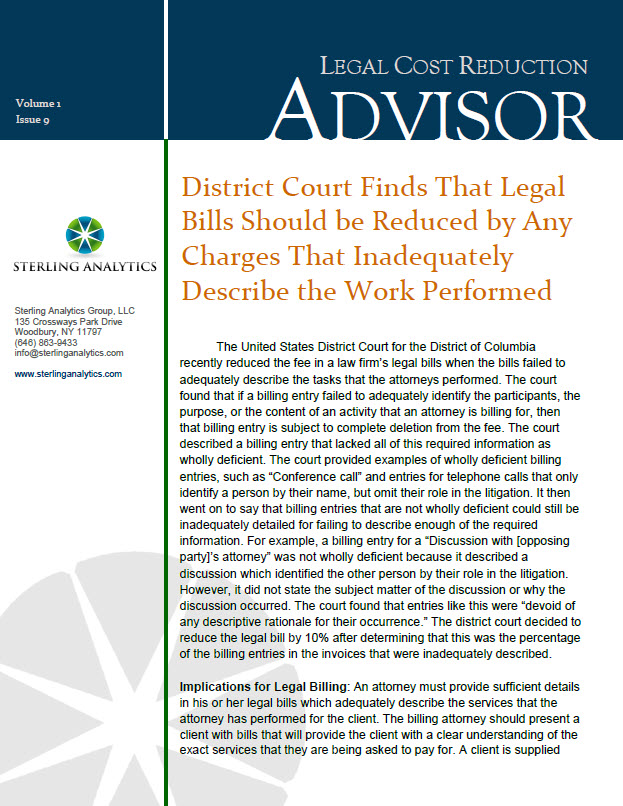 The United States District Court for the District of Columbia recently reduced the fee in a law firm’s legal bills when the bills failed to adequately describe the tasks that the attorneys performed. The court found that if a billing entry failed to adequately identify the participants, the purpose, or the content of an activity that an attorney is billing for, then that billing entry is subject to complete deletion from the fee. The court described a billing entry that lacked all of this required information as wholly deficient. The court provided examples of wholly deficient billing entries, such as “Conference call” and entries for telephone calls that only identify a person by their name, but omit their role in the litigation. It then went on to say that billing entries that are not wholly deficient could still be inadequately detailed for failing to describe enough of the required information. For example, a billing entry for a “Discussion with [opposing party]’s attorney” was not wholly deficient because it described a discussion which identified the other person by their role in the litigation. However, it did not state the subject matter of the discussion or why the discussion occurred. The court found that entries like this were “devoid of any descriptive rationale for their occurrence.” The district court decided to reduce the legal bill by 10% after determining that this was the percentage of the billing entries in the invoices that were inadequately described.

Implications for Legal Billing: An attorney must provide sufficient details in his or her legal bills which adequately describe the services that the attorney has performed for the client. The billing attorney should present a client with bills that will provide the client with a clear understanding of the exact services that they are being asked to pay for. A client is supplied this clear understanding when the charges include details such as the participants in the attorney’s conferences and the subject matter of the attorney’s meetings. Because of the substantial hourly rates that attorneys commonly charge, the client pays a considerable price for an attorney’s services. A combination of high hourly attorney rates and the practice of providing a client with bills that describe the charges in general terms can potentially lead to attorney abuse, since the missing details leave the client unable to scrutinize the charges and assess whether an excessive amount of time was spent performing a task. As a result, the client has a right to know the specific details surrounding the services for which it is being charged.