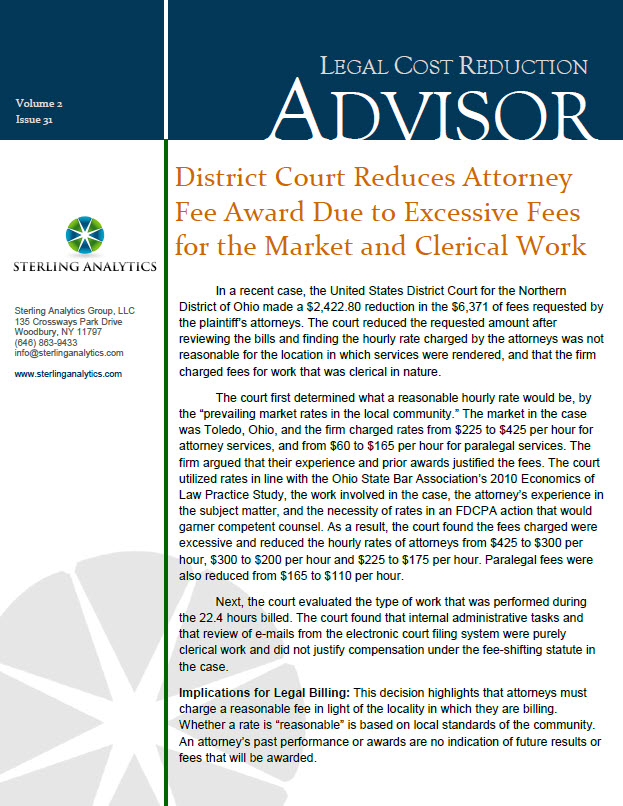 In a recent case, the United States District Court for the Northern District of Ohio made a $2,422.80 reduction in the $6,371 of fees requested by the plaintiff’s attorneys. The court reduced the requested amount after reviewing the bills and finding the hourly rate charged by the attorneys was not reasonable for the location in which services were rendered, and that the firm charged fees for work that was clerical in nature.

The court first determined what a reasonable hourly rate would be, by the “prevailing market rates in the local community.” The market in the case was Toledo, Ohio, and the firm charged rates from $225 to $425 per hour for attorney services, and from $60 to $165 per hour for paralegal services. The firm argued that their experience and prior awards justified the fees. The court utilized rates in line with the Ohio State Bar Association’s 2010 Economics of Law Practice Study, the work involved in the case, the attorney’s experience in the subject matter, and the necessity of rates in an FDCPA action that would garner competent counsel. As a result, the court found the fees charged were excessive and reduced the hourly rates of attorneys from $425 to $300 per hour, $300 to $200 per hour and $225 to $175 per hour. Paralegal fees were also reduced from $165 to $110 per hour.

Next, the court evaluated the type of work that was performed during the 22.4 hours billed. The court found that internal administrative tasks and that review of e-mails from the electronic court filing system were purely clerical work and did not justify compensation under the fee-shifting statute in the case.

Implications for Legal Billing: This decision highlights that attorneys must charge a reasonable fee in light of the locality in which they are billing. Whether a rate is “reasonable” is based on local standards of the community. An attorney’s past performance or awards are no indication of future results or fees that will be awarded.

The court’s decision also highlights that is unreasonable to charge mere clerical tasks as part of a client’s legal fee. And on a related note, the court also noted that document preparation must be performed within a reasonable amount of time in order to be reasonable.

Lastly, it is unusual that a court would be so deferential to block billing procedures. Block billing is ethically objectionable because it may lead to excessive charges and overbilling. What seemed to save the law firm in this case was that they charged in minimum units of time of one-tenth of an hour blocks. The court indicated that because this was done and there was a pattern to the sporadic block billing, it was permissible to do so.