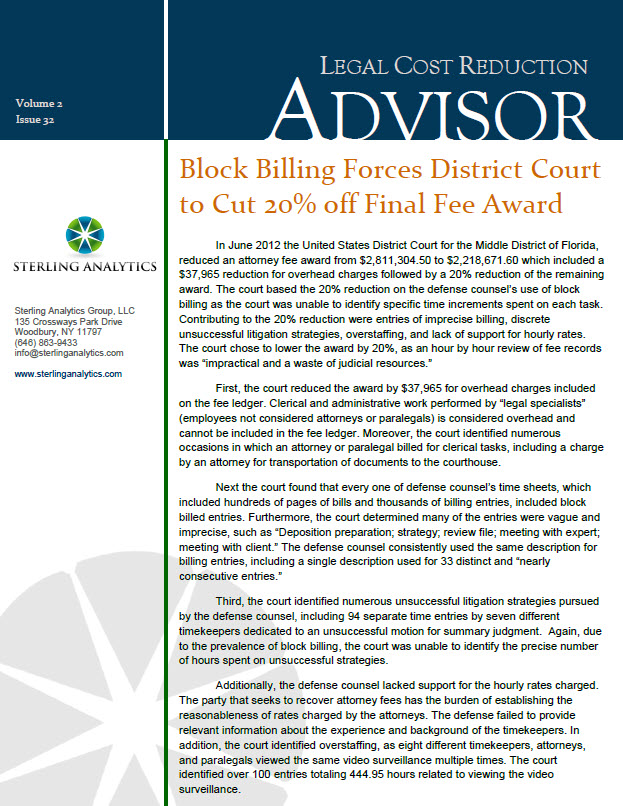 In June 2012 the United States District Court for the Middle District of Florida, reduced an attorney fee award from $2,811,304.50 to $2,218,671.60 which included a $37,965 reduction for overhead charges followed by a 20% reduction of the remaining award. The court based the 20% reduction on the defense counsel’s use of block billing as the court was unable to identify specific time increments spent on each task. Contributing to the 20% reduction were entries of imprecise billing, discrete unsuccessful litigation strategies, overstaffing, and lack of support for hourly rates. The court chose to lower the award by 20%, as an hour by hour review of fee records was “impractical and a waste of judicial resources.”

First, the court reduced the award by $37,965 for overhead charges included on the fee ledger. Clerical and administrative work performed by “legal specialists” (employees not considered attorneys or paralegals) is considered overhead and cannot be included in the fee ledger. Moreover, the court identified numerous occasions in which an attorney or paralegal billed for clerical tasks, including a charge by an attorney for transportation of documents to the courthouse.

Next the court found that every one of defense counsel’s time sheets, which included hundreds of pages of bills and thousands of billing entries, included block billed entries. Furthermore, the court determined many of the entries were vague and imprecise, such as “Deposition preparation; strategy; review file; meeting with expert; meeting with client.” The defense counsel consistently used the same description for billing entries, including a single description used for 33 distinct and “nearly consecutive entries.”

Third, the court identified numerous unsuccessful litigation strategies pursued by the defense counsel, including 94 separate time entries by seven different timekeepers dedicated to an unsuccessful motion for summary judgment. Again, due to the prevalence of block billing, the court was unable to identify the precise number of hours spent on unsuccessful strategies.

Additionally, the defense counsel lacked support for the hourly rates charged. The party that seeks to recover attorney fees has the burden of establishing the reasonableness of rates charged by the attorneys. The defense failed to provide relevant information about the experience and background of the timekeepers. In addition, the court identified overstaffing, as eight different timekeepers, attorneys, and paralegals viewed the same video surveillance multiple times. The court identified over 100 entries totaling 444.95 hours related to viewing the video surveillance.

Finally, the court analyzed the defense counsel’s use of a fee multiplier. The court looked at whether the multiplier was required to obtain competent counsel, whether the risk of non-payment was mitigated in another way and considered the amount involved, the results obtained, and fee arrangement between the attorney and client. There is a “strong presumption” that the lodestar is sufficient to attract competent counsel, therefore the court found the use of a fee multiplier unreasonable. Furthermore the defense counsel mitigated the risk of non-payment by charging high hourly rates and the fee awarded exceeded the agreed upon contingency fee amount of $815,538.35.

Implications for Legal Billing: The court’s application of the 20% reduction illustrates the effect of pervasive block billing. When a court is unable to parse out the hours spent on a task, the court is more likely to significantly reduce the fee as a whole, instead of simply removing an impermissible charge from the fee.

The attorney seeking to recover fees is responsible for providing evidence that establishes the reasonableness of the rate charged including information about the experience and background of the timekeepers.

Finally, fee multipliers will be scrutinized as the lodestar method of calculating legal fees is the preferred method.