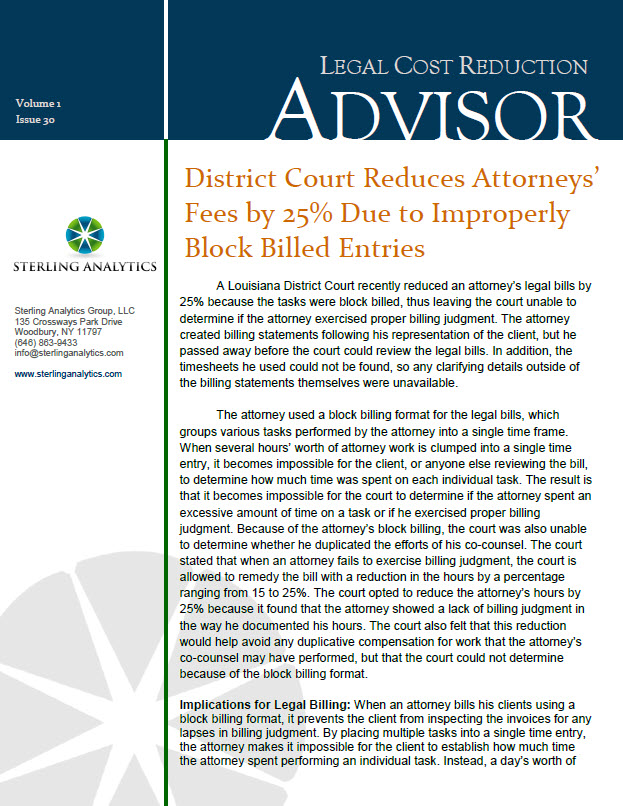 A Louisiana District Court recently reduced an attorney’s legal bills by 25% because the tasks were block billed, thus leaving the court unable to determine if the attorney exercised proper billing judgment. The attorney created billing statements following his representation of the client, but he passed away before the court could review the legal bills. In addition, the timesheets he used could not be found, so any clarifying details outside of the billing statements themselves were unavailable.

The attorney used a block billing format for the legal bills, which groups various tasks performed by the attorney into a single time frame. When several hours’ worth of attorney work is clumped into a single time entry, it becomes impossible for the client, or anyone else reviewing the bill, to determine how much time was spent on each individual task. The result is that it becomes impossible for the court to determine if the attorney spent an excessive amount of time on a task or if he exercised proper billing judgment. Because of the attorney’s block billing, the court was also unable to determine whether he duplicated the efforts of his co-counsel. The court stated that when an attorney fails to exercise billing judgment, the court is allowed to remedy the bill with a reduction in the hours by a percentage ranging from 15 to 25%. The court opted to reduce the attorney’s hours by 25% because it found that the attorney showed a lack of billing judgment in the way he documented his hours. The court also felt that this reduction would help avoid any duplicative compensation for work that the attorney’s co-counsel may have performed, but that the court could not determine because of the block billing format.

Implications for Legal Billing: When an attorney bills his clients using a block billing format, it prevents the client from inspecting the invoices for any lapses in billing judgment. By placing multiple tasks into a single time entry, the attorney makes it impossible for the client to establish how much time the attorney spent performing an individual task. Instead, a day’s worth of work is packed into a single time entry leaving the client guessing whether a certain task took the attorney several minutes or several hours to perform. This then impedes the client from determining if the attorney spent an excessive amount of time on the task, if he should have used billing judgment to exclude it from the bill, or if a task was needlessly duplicated. When the court slashed the attorney’s bill by 25% across the board, it was making a presumption that the block billed time entries contained these legal billing abuses. The court exhibited an intolerance to these kinds of billing practices that prevent a client from obtaining a more detailed breakdown of the attorney’s work.