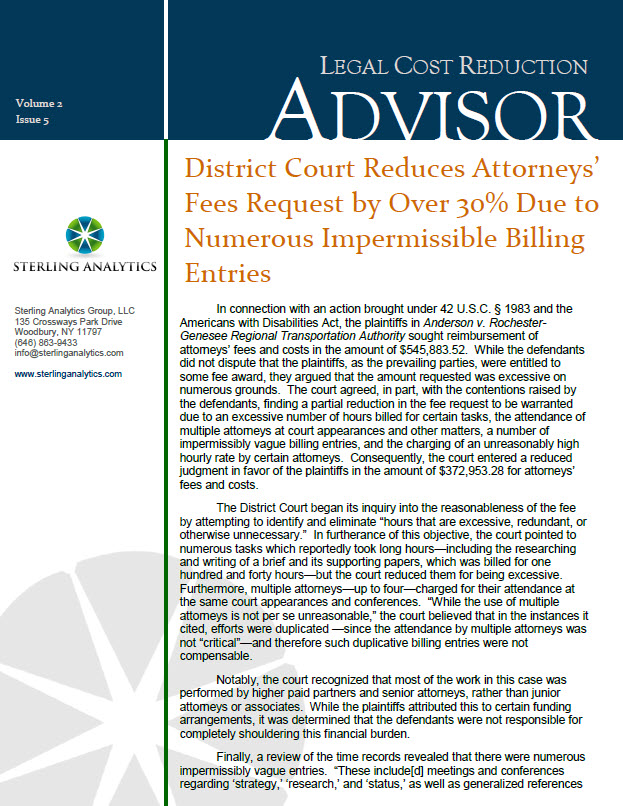 In connection with an action brought under 42 U.S.C. § 1983 and the Americans with Disabilities Act, the plaintiffs in Anderson v. Rochester-Genesee Regional Transportation Authority sought reimbursement of attorneys’ fees and costs in the amount of $545,883.52. While the defendants did not dispute that the plaintiffs, as the prevailing parties, were entitled to some fee award, they argued that the amount requested was excessive on numerous grounds. The court agreed, in part, with the contentions raised by the defendants, finding a partial reduction in the fee request to be warranted due to an excessive number of hours billed for certain tasks, the attendance of multiple attorneys at court appearances and other matters, a number of impermissibly vague billing entries, and the charging of an unreasonably high hourly rate by certain attorneys. Consequently, the court entered a reduced judgment in favor of the plaintiffs in the amount of $372,953.28 for attorneys’ fees and costs.

The District Court began its inquiry into the reasonableness of the fee by attempting to identify and eliminate “hours that are excessive, redundant, or otherwise unnecessary.” In furtherance of this objective, the court pointed to numerous tasks which reportedly took long hours—including the researching and writing of a brief and its supporting papers, which was billed for one hundred and forty hours—but the court reduced them for being excessive. Furthermore, multiple attorneys—up to four—charged for their attendance at the same court appearances and conferences. “While the use of multiple attorneys is not per se unreasonable,” the court believed that in the instances it cited, efforts were duplicated —since the attendance by multiple attorneys was not “critical”—and therefore such duplicative billing entries were not compensable.

Notably, the court recognized that most of the work in this case was performed by higher paid partners and senior attorneys, rather than junior attorneys or associates. While the plaintiffs attributed this to certain funding arrangements, it was determined that the defendants were not responsible for completely shouldering this financial burden.

Finally, a review of the time records revealed that there were numerous impermissibly vague entries. “These include[d] meetings and conferences regarding ‘strategy,’ ‘research,’ and ‘status,’ as well as generalized references to work on ‘brief[s]’ and ‘affidavit[s],’ and to ‘prepar[ing]’ for conferences, oral arguments, etc.” Although the district recognized that counsel was not obligated to “explain in minute detail what work was performed,” the generic descriptions provided were insufficient in order to determine whether time was reasonably spent. Thus, a further reduction in the award was warranted.

Implications for Legal Billing: While it is permissible for multiple attorneys to work on a single case, clients should be cautious of billing entries that charge the client for the attendance of multiple attorneys at the same court hearing or conference. As articulated in this case, the presence of more than one attorney at a court hearing or conference must be critical to the representation, otherwise it “lead[s] to duplication of effort and excessive hours being billed.”