District Court Reduces Fee Award by Over $69,000 for Unreasonable Hourly Rates and for Administrative and Duplicative Tasks 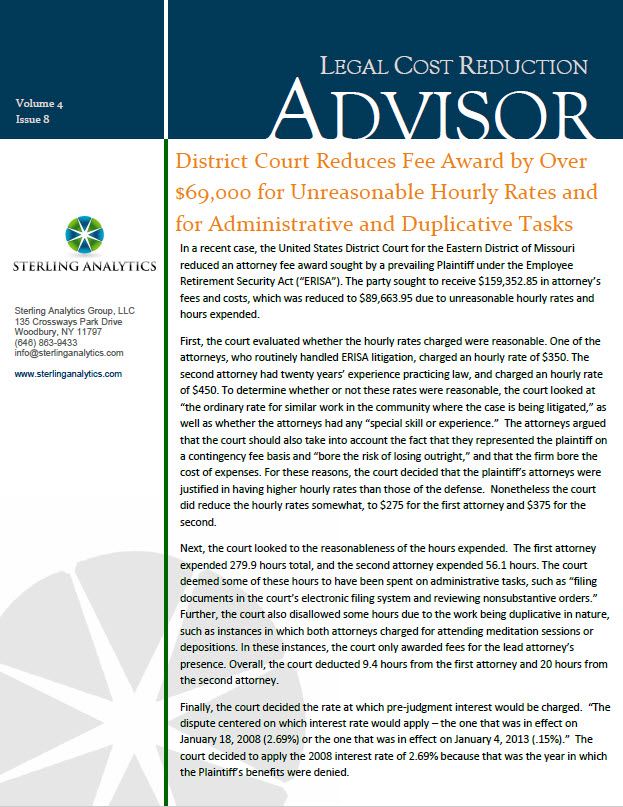 In a recent case, the United States District Court for the Eastern District of Missouri reduced an attorney fee award sought by a prevailing Plaintiff under the Employee Retirement Security Act (“ERISA”). The party sought to receive $159,352.85 in attorney’s fees and costs, which was reduced to $89,663.95 due to unreasonable hourly rates and hours expended.

First, the court evaluated whether the hourly rates charged were reasonable. One of the attorneys, who routinely handled ERISA litigation, charged an hourly rate of $350. The second attorney had twenty years’ experience practicing law, and charged an hourly rate of $450. To determine whether or not these rates were reasonable, the court looked at “the ordinary rate for similar work in the community where the case is being litigated,” as well as whether the attorneys had any “special skill or experience.” The attorneys argued that the court should also take into account the fact that they represented the plaintiff on a contingency fee basis and “bore the risk of losing outright,” and that the firm bore the cost of expenses. For these reasons, the court decided that the plaintiff’s attorneys were justified in having higher hourly rates than those of the defense. Nonetheless the court did reduce the hourly rates somewhat, to $275 for the first attorney and $375 for the second.

Next, the court looked to the reasonableness of the hours expended. The first attorney expended 279.9 hours total, and the second attorney expended 56.1 hours. The court deemed some of these hours to have been spent on administrative tasks, such as “filing documents in the court’s electronic filing system and reviewing nonsubstantive orders.” Further, the court also disallowed some hours due to the work being duplicative in nature, such as instances in which both attorneys charged for attending meditation sessions or depositions. In these instances, the court only awarded fees for the lead attorney’s presence.Overall, the court deducted 9.4 hours from the first attorney and 20 hours from the second attorney.

Implications for Legal Billing: This court ruling affirms that adjustments can be made to hourly rates that are not in line with prevailing market rates in the community, although the special skill and experience of the attorney, and the existence of any contingency fee arrangements, may also be taken into account in determining a final award.

In addition, this case stands for the principle that courts will not reimburse for attorney’s fees that are administrative or duplicative in nature. If a task could have been performed by secretarial staff, or if two attorneys billed for tasks that only required one, the court may wholly deduct those hours.