District Court Reduces Fee Request by Nearly $24,000 Due to Overstaffing of Simple Case 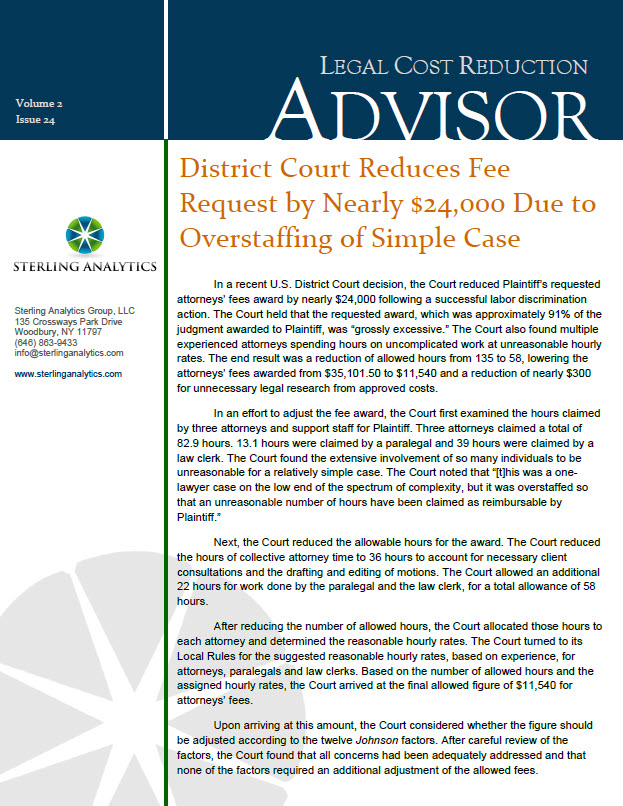 In a recent U.S. District Court decision, the Court reduced Plaintiff’s requested attorneys’ fees award by nearly $24,000 following a successful labor discrimination action. The Court held that the requested award, which was approximately 91% of the judgment awarded to Plaintiff, was “grossly excessive.” The Court also found multiple experienced attorneys spending hours on uncomplicated work at unreasonable hourly rates. The end result was a reduction of allowed hours from 135 to 58, lowering the attorneys’ fees awarded from $35,101.50 to $11,540 and a reduction of nearly $300 for unnecessary legal research from approved costs.

In an effort to adjust the fee award, the Court first examined the hours claimed by three attorneys and support staff for Plaintiff. Three attorneys claimed a total of 82.9 hours. 13.1 hours were claimed by a paralegal and 39 hours were claimed by a law clerk. The Court found the extensive involvement of so many individuals to be unreasonable for a relatively simple case. The Court noted that “[t]his was a one-lawyer case on the low end of the spectrum of complexity, but it was overstaffed so that an unreasonable number of hours have been claimed as reimbursable by Plaintiff.”

Upon arriving at this amount, the Court considered whether the figure should be adjusted according to the twelve Johnson factors. After careful review of the factors, the Court found that all concerns had been adequately addressed and that none of the factors required an additional adjustment of the allowed fees.

Finally, the Court found that the requested cost reimbursements were generally reasonable, with the exception of the legal research fees. Accordingly, the court reduced the amount awarded for legal research expenses to $200.

Implications for Legal Billing: This case demonstrates the court’s reluctance to allow attorney fee awards for cases that are overstaffed. Of primary concern to the court here was the uncomplicated nature of the case. In evaluating the type of work done, the period of time in which it was completed, and the number of individuals involved, the court asserted its authority here to disallow excessive fee requests.

Clients should carefully review their legal bills, especially in uncomplicated cases, to ensure that attorneys are not overstaffing the case in order to generate more fees. Clients can also clearly define the amount of attorneys to be used for certain tasks and on the case in general at the outset of the engagement, in an effort to ensure that the case will not be overstaffed.