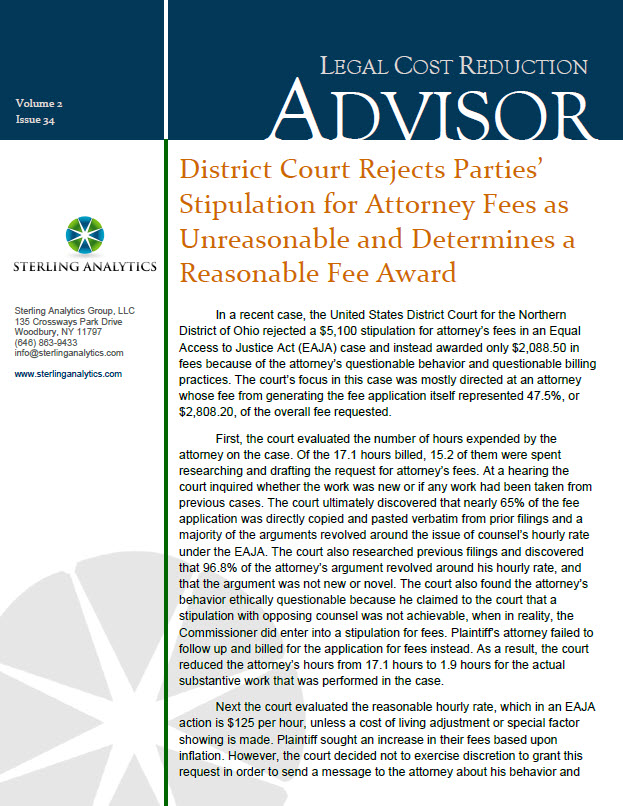 In a recent case, the United States District Court for the Northern District of Ohio rejected a $5,100 stipulation for attorney’s fees in an Equal Access to Justice Act (EAJA) case and instead awarded only $2,088.50 in fees because of the attorney’s questionable behavior and questionable billing practices. The court’s focus in this case was mostly directed at an attorney whose fee from generating the fee application itself represented 47.5%, or $2,808.20, of the overall fee requested.

First, the court evaluated the number of hours expended by the attorney on the case. Of the 17.1 hours billed, 15.2 of them were spent researching and drafting the request for attorney’s fees. At a hearing the court inquired whether the work was new or if any work had been taken from previous cases. The court ultimately discovered that nearly 65% of the fee application was directly copied and pasted verbatim from prior filings and a majority of the arguments revolved around the issue of counsel’s hourly rate under the EAJA. The court also researched previous filings and discovered that 96.8% of the attorney’s argument revolved around his hourly rate, and that the argument was not new or novel. The court also found the attorney’s behavior ethically questionable because he claimed to the court that a stipulation with opposing counsel was not achievable, when in reality, the Commissioner did enter into a stipulation for fees. Plaintiff’s attorney failed to follow up and billed for the application for fees instead. As a result, the court reduced the attorney’s hours from 17.1 hours to 1.9 hours for the actual substantive work that was performed in the case.

Next the court evaluated the reasonable hourly rate, which in an EAJA action is $125 per hour, unless a cost of living adjustment or special factor showing is made. Plaintiff sought an increase in their fees based upon inflation. However, the court decided not to exercise discretion to grant this request in order to send a message to the attorney about his behavior and billing practices. The court found it unreasonable that counsel attempted to spend government money by billing for the same work repeatedly and attempting to deceive the court when asked how much of the work was recycled from previous filings.

Implications for Legal Billing: This case highlights that courts will not rubber stamp a stipulation for fees merely because the parties agree. A court will often dissect and research the fees requested, especially when they are not proportional to the underlying award of fees sought in the case.

If a court finds work unnecessary, duplicative, or otherwise questionable, an attorney may pay the price in his or her compensation.