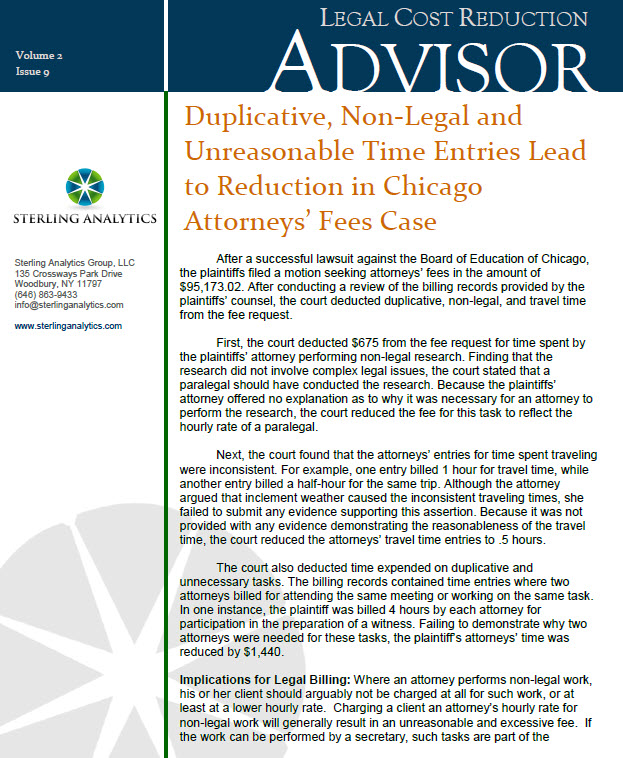 After a successful lawsuit against the Board of Education of Chicago, the plaintiffs filed a motion seeking attorneys’ fees in the amount of $95,173.02. After conducting a review of the billing records provided by the plaintiffs’ counsel, the court deducted duplicative, non-legal, and travel time from the fee request.

Next, the court found that the attorneys’ entries for time spent traveling were inconsistent. For example, one entry billed 1 hour for travel time, while another entry billed a half-hour for the same trip. Although the attorney argued that inclement weather caused the inconsistent traveling times, she failed to submit any evidence supporting this assertion. Because it was not provided with any evidence demonstrating the reasonableness of the travel time, the court reduced the attorneys’ travel time entries to .5 hours.

The court also deducted time expended on duplicative and unnecessary tasks. The billing records contained time entries where two attorneys billed for attending the same meeting or working on the same task. In one instance, the plaintiff was billed 4 hours by each attorney for participation in the preparation of a witness. Failing to demonstrate why two attorneys were needed for these tasks, the plaintiff’s attorneys’ time was reduced by $1,440.

* Ryan M. v. Board of Education of the City of Chicago, 731 F. Supp.2d 776 (N.D. Ill. 2010). Full copies of court decisions may be available through counsel or through various Internet links or paid services.