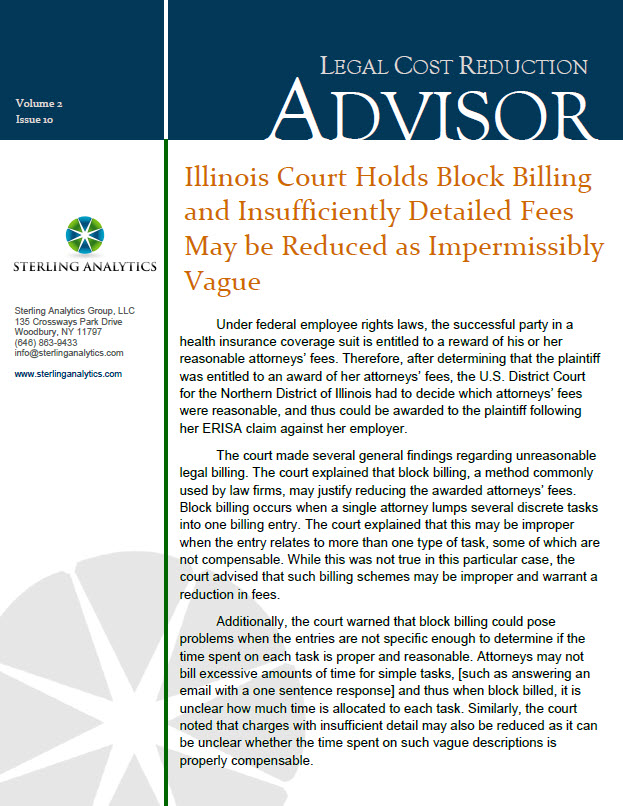 The court made several general findings regarding unreasonable legal billing. The court explained that block billing, a method commonly used by law firms, may justify reducing the awarded attorneys’ fees. Block billing occurs when a single attorney lumps several discrete tasks into one billing entry. The court explained that this may be improper when the entry relates to more than one type of task, some of which are not compensable. While this was not true in this particular case, the court advised that such billing schemes may be improper and warrant a reduction in fees.

Additionally, the court warned that block billing could pose problems when the entries are not specific enough to determine if the time spent on each task is proper and reasonable. Attorneys may not bill excessive amounts of time for simple tasks, [such as answering an email with a one sentence response] and thus when block billed, it is unclear how much time is allocated to each task. Similarly, the court noted that charges with insufficient detail may also be reduced as it can be unclear whether the time spent on such vague descriptions is properly compensable.

Implications for Legal Billing: While many legal bills will not be sifted by a court, there are still lessons to be learned from the Illinois court’s analysis of these legal fees. Block billing remains a common practice in legal billing, and yet it may result in clients paying a great deal more than should reasonably be required. By grouping many tasks together, attorneys may blur the amount of time delegated to each task and charge for tasks that were otherwise too brief or not compensable at all. The best way to handle this common problem is to request that attorneys do not block bill, and then commit firms to unblocked billing protocols in the firm’s retainer agreement. By limiting block billing in this way, it is possible to ensure enough clarity to determine if an attorney has charged a reasonable amount of time for each distinct and necessary task.