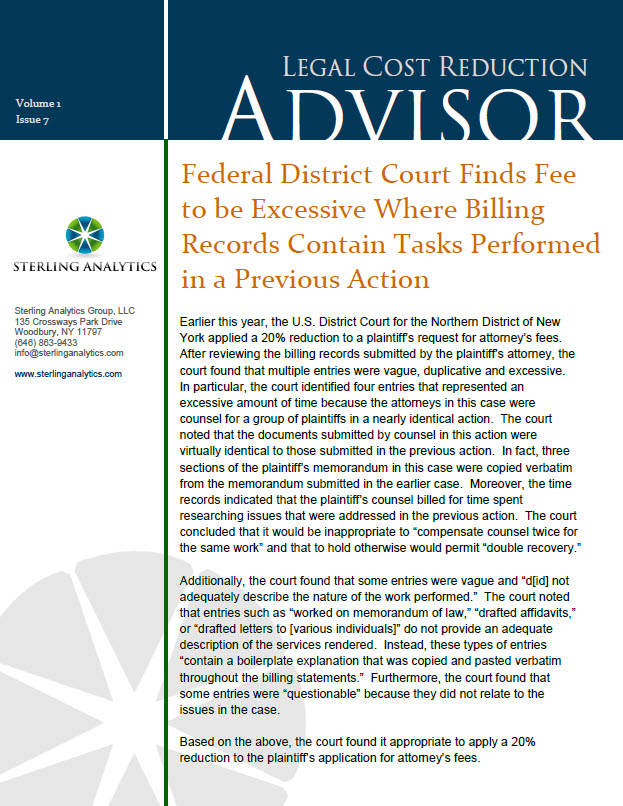 Earlier this year, the U.S. District Court for the Northern District of New York applied a 20% reduction to a plaintiff’s request for attorney’s fees. After reviewing the billing records submitted by the plaintiff’s attorney, the court found that multiple entries were vague, duplicative and excessive. In particular, the court identified four entries that represented an excessive amount of time because the attorneys in this case were counsel for a group of plaintiffs in a nearly identical action. The court noted that the documents submitted by counsel in this action were virtually identical to those submitted in the previous action. In fact, three sections of the plaintiff’s memorandum in this case were copied verbatim from the memorandum submitted in the earlier case. Moreover, the time records indicated that the plaintiff’s counsel billed for time spent researching issues that were addressed in the previous action. The court concluded that it would be inappropriate to “compensate counsel twice for the same work” and that to hold otherwise would permit “double recovery.”

Additionally, the court found that some entries were vague and “d[id] not adequately describe the nature of the work performed.” The court noted that entries such as “worked on memorandum of law,” “drafted affidavits,” or “drafted letters to [various individuals]” do not provide an adequate description of the services rendered. Instead, these types of entries “contain a boilerplate explanation that was copied and pasted verbatim throughout the billing statements.” Furthermore, the court found that some entries were “questionable” because they did not relate to the issues in the case.

Based on the above, the court found it appropriate to apply a 20% reduction to the plaintiff’s application for attorney’s fees.

Implications for Legal Billing: Excessive fees can arise by an attorney’s use of a number of impermissible billing practices. For example, overstaffing, spending too much time on a relatively simple task, and performing the same task multiple times can all lead to excessive fees. This case recognizes that work that has been performed and billed by an attorney in a previous matter cannot be billed for again in a subsequent matter. To bill for the same task twice would represent an excessive fee, and an unfair practice. This is true even where the work performed in the previous action was completed for a different client. Undoubtedly, it would be difficult to determine if an attorney has performed the same work for a previous client or has used part of a brief or memorandum that was submitted in another case. However, many companies hire counsel for matters that are similar in nature and would include performing repetitive tasks. By conducting a review of the billing records from a previous matter, a client may be able to determine if he or she is being double billed in a subsequent matter. Though time consuming, this type of review may save a company a significant amount of money in legal fees.