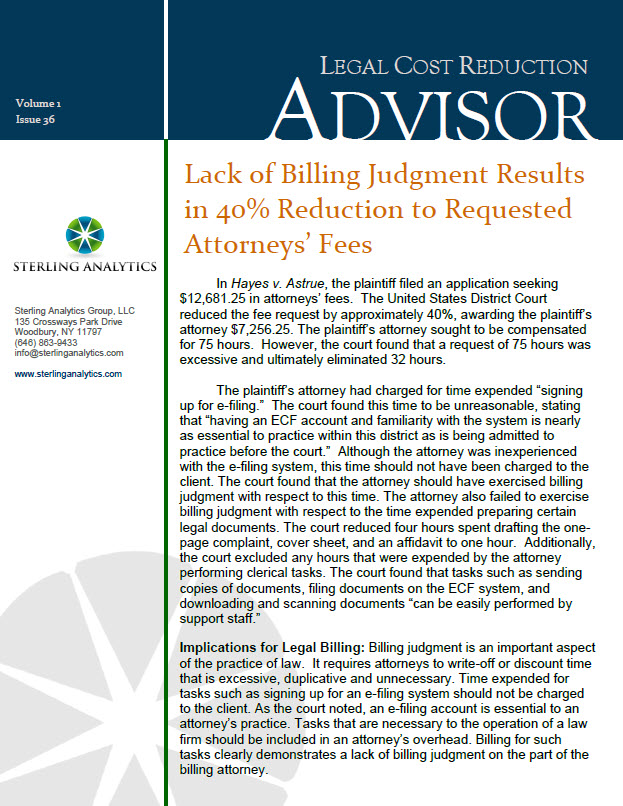 In Hayes v. Astrue, the plaintiff filed an application seeking $12,681.25 in attorneys’ fees. The United States District Court reduced the fee request by approximately 40%, awarding the plaintiff’s attorney $7,256.25. The plaintiff’s attorney sought to be compensated for 75 hours. However, the court found that a request of 75 hours was excessive and ultimately eliminated 32 hours.

The plaintiff’s attorney had charged for time expended “signing up for e-filing.” The court found this time to be unreasonable, stating that “having an ECF account and familiarity with the system is nearly as essential to practice within this district as is being admitted to practice before the court.” Although the attorney was inexperienced with the e-filing system, this time should not have been charged to the client. The court found that the attorney should have exercised billing judgment with respect to this time. The attorney also failed to exercise billing judgment with respect to the time expended preparing certain legal documents. The court reduced four hours spent drafting the one-page complaint, cover sheet, and an affidavit to one hour. Additionally, the court excluded any hours that were expended by the attorney performing clerical tasks. The court found that tasks such as sending copies of documents, filing documents on the ECF system, and downloading and scanning documents “can be easily performed by support staff.”

Implications for Legal Billing: Billing judgment is an important aspect of the practice of law. It requires attorneys to write-off or discount time that is excessive, duplicative and unnecessary. Time expended for tasks such as signing up for an e-filing system should not be charged to the client. As the court noted, an e-filing account is essential to an attorney’s practice. Tasks that are necessary to the operation of a law firm should be included in an attorney’s overhead. Billing for such tasks clearly demonstrates a lack of billing judgment on the part of the billing attorney.

Furthermore, an attorney must use billing judgment where inexperience results in excessive time for the task. As stated by the court, “[i]t does not follow that the amount of time actually expended is the amount of time reasonably expended.” Where an inexperienced attorney is in the process of learning, it is improper for the attorney to charge the client the entire time expended.