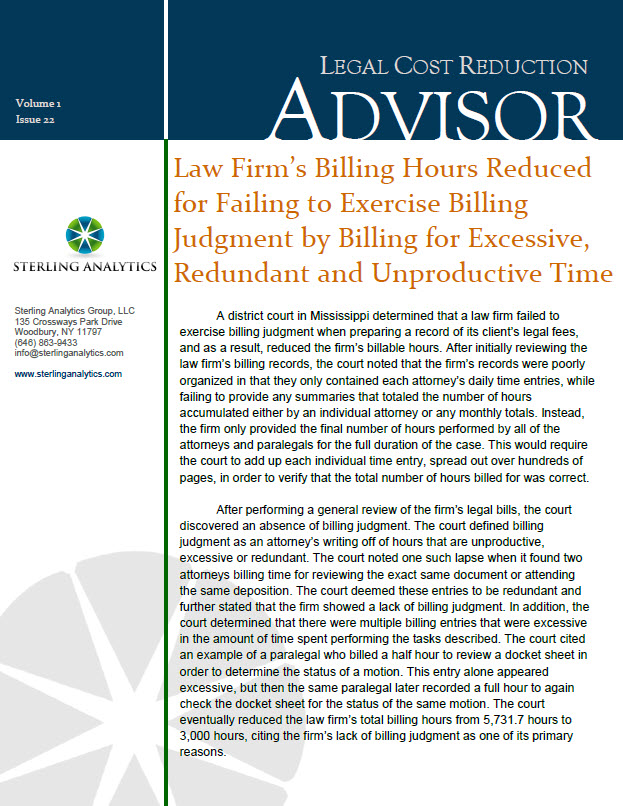 A district court in Mississippi determined that a law firm failed to exercise billing judgment when preparing a record of its client’s legal fees, and as a result, reduced the firm’s billable hours. After initially reviewing the law firm’s billing records, the court noted that the firm’s records were poorly organized in that they only contained each attorney’s daily time entries, while failing to provide any summaries that totaled the number of hours accumulated either by an individual attorney or any monthly totals. Instead, the firm only provided the final number of hours performed by all of the attorneys and paralegals for the full duration of the case. This would require the court to add up each individual time entry, spread out over hundreds of pages, in order to verify that the total number of hours billed for was correct.

After performing a general review of the firm’s legal bills, the court discovered an absence of billing judgment. The court defined billing judgment as an attorney’s writing off of hours that are unproductive, excessive or redundant. The court noted one such lapse when it found two attorneys billing time for reviewing the exact same document or attending the same deposition. The court deemed these entries to be redundant and further stated that the firm showed a lack of billing judgment. In addition, the court determined that there were multiple billing entries that were excessive in the amount of time spent performing the tasks described. The court cited an example of a paralegal who billed a half hour to review a docket sheet in order to determine the status of a motion. This entry alone appeared excessive, but then the same paralegal later recorded a full hour to again check the docket sheet for the status of the same motion. The court eventually reduced the law firm’s total billing hours from 5,731.7 hours to 3,000 hours, citing the firm’s lack of billing judgment as one of its primary reasons.

Implications for Legal Billing: It is immediately evident from this case that law firms can use both excessive and redundant billing methods to increase their clients’ legal bills. By assigning multiple attorneys to perform the same task, a law firm may try to bill the client twice for work that could have reasonably been performed by one person. In the example that the court used, multiple attorneys were billing the client for reviewing the same exact document. This could be an attempt at overstaffing, which can occur when a firm assigns extra attorneys to review work that was originally created by another attorney in the firm. Even if one attorney found something that another attorney missed, the firm would show a lack of billing judgment by charging the client for both attorneys’ examinations. This would be redundant work and it could also imply that one attorney’s work was unproductive.

Clients also need to be wary of time entries that are excessive in relation to the amount of time it should take an attorney to perform a task. Reviewing a docket sheet for an hour, or even a half hour, to determine a motion’s status is clearly an unnecessary amount of time to be spending on that task. The law firm should have known better than to bill for that full amount of time, even if it did allow its employee to spend their time this way. Billing judgment would dictate that any excessive amount of time spent by attorneys or paralegals attempting to perform a task should be excluded from the legal fees charged to the client.