New York District Court Reduces Fee Award by More than $108,500 Due to Inconsistencies in Legal Bills and Travel Time 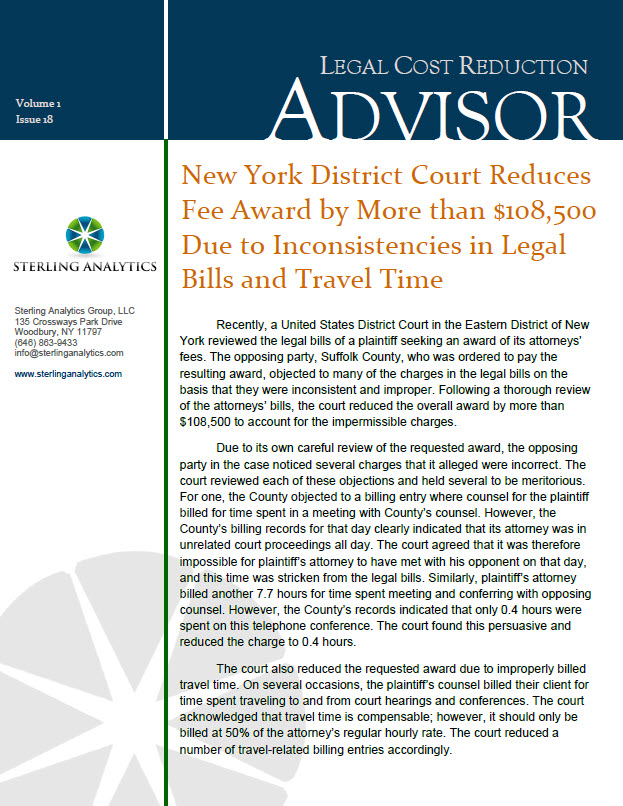 Recently, a United States District Court in the Eastern District of New York reviewed the legal bills of a plaintiff seeking an award of its attorneys’ fees. The opposing party, Suffolk County, who was ordered to pay the resulting award, objected to many of the charges in the legal bills on the basis that they were inconsistent and improper. Following a thorough review of the attorneys’ bills, the court reduced the overall award by more than $108,500 to account for the impermissible charges.

Due to its own careful review of the requested award, the opposing party in the case noticed several charges that it alleged were incorrect. The court reviewed each of these objections and held several to be meritorious. For one, the County objected to a billing entry where counsel for the plaintiff billed for time spent in a meeting with County’s counsel. However, the County’s billing records for that day clearly indicated that its attorney was in unrelated court proceedings all day. The court agreed that it was therefore impossible for plaintiff’s attorney to have met with his opponent on that day, and this time was stricken from the legal bills. Similarly, plaintiff’s attorney billed another 7.7 hours for time spent meeting and conferring with opposing counsel. However, the County’s records indicated that only 0.4 hours were spent on this telephone conference. The court found this persuasive and reduced the charge to 0.4 hours.

The court also reduced the requested award due to improperly billed travel time. On several occasions, the plaintiff’s counsel billed their client for time spent traveling to and from court hearings and conferences. The court acknowledged that travel time is compensable; however, it should only be billed at 50% of the attorney’s regular hourly rate. The court reduced a number of travel-related billing entries accordingly.

Implications for Legal Billing: Overall, this case demonstrates the importance of requiring an attorney to keep contemporaneous time records. Because falsifying billing records is a grave ethical violation, it is unlikely that the plaintiff’s attorney charged his client for a meeting that never actually occurred. Rather, it is more plausible that the attorney attempted to recreate his time records after the fact, and recorded the conference on the incorrect date. Had plaintiff’s counsel contemporaneously recorded his time, he would have billed for the meeting immediately after it occurred, on the proper date. Then, the billing records between the County and plaintiff would have been consistent and the time would likely have been compensated without objection.

Additionally, this case reiterates the proposition that travel time should be billed at half of an attorney’s reasonable hourly rate. This bright line rule simplifies legal billing, and clients should insist upon its enforcement prior to engaging the services of an attorney. While these are ethical and sound billing practices, they are not always followed, and it is essential that clients require them of their attorneys to prevent excessive and improper legal fees.