Over 25% of Borders’ Bankruptcy Billing Sample Found to be Objectionable 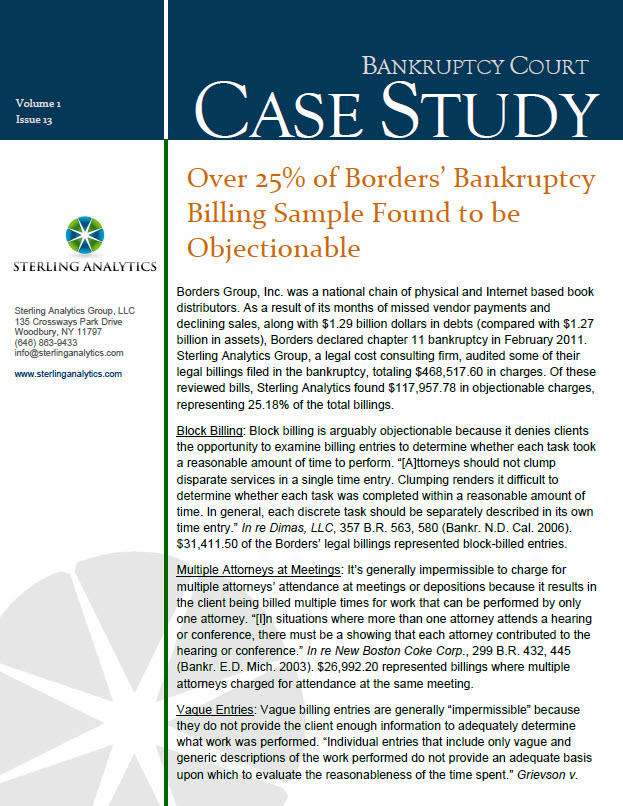 Borders Group, Inc. was a national chain of physical and Internet based book distributors. As a result of its months of missed vendor payments and declining sales, along with $1.29 billion dollars in debts (compared with $1.27 billion in assets), Borders declared chapter 11 bankruptcy in February 2011. Sterling Analytics Group, a legal cost consulting firm, audited some of their legal billings filed in the bankruptcy, totaling $468,517.60 in charges. Of these reviewed bills, Sterling Analytics found $117,957.78 in objectionable charges, representing 25.18% of the total billings.

Block Billing: Block billing is arguably objectionable because it denies clients the opportunity to examine billing entries to determine whether each task took a reasonable amount of time to perform. “[A]ttorneys should not clump disparate services in a single time entry. Clumping renders it difficult to determine whether each task was completed within a reasonable amount of time. In general, each discrete task should be separately described in its own time entry.” In re Dimas, LLC, 357 B.R. 563, 580 (Bankr. N.D. Cal. 2006). $31,411.50 of the Borders’ legal billings represented block-billed entries.

Multiple Attorneys at Meetings: It’s generally impermissible to charge for multiple attorneys’ attendance at meetings or depositions because it results in the client being billed multiple times for work that can be performed by only one attorney. “[I]n situations where more than one attorney attends a hearing or conference, there must be a showing that each attorney contributed to the hearing or conference.” In re New Boston Coke Corp., 299 B.R. 432, 445 (Bankr. E.D. Mich. 2003). $26,992.20 represented billings where multiple attorneys charged for attendance at the same meeting.

Vague Entries: Vague billing entries are generally “impermissible” because they do not provide the client enough information to adequately determine what work was performed. “Individual entries that include only vague and generic descriptions of the work performed do not provide an adequate basis upon which to evaluate the reasonableness of the time spent.” Grievson v. Rochester Psychiatric Center, 2010 WL 3894983 at *8 (W.D.N.Y. 2010). “[A]n applicant requesting an award of fees has the burden to prove the reasonableness of such fees and that vague and otherwise insufficient descriptions of services often result in a denial or reduction in the amount of fees sought.” In re Acevedo, 2010 WL 411105 at *2 n.1 (Bkrtcy E.D.N.Y. 2010). $21,680.50 in charges were “overly vague.”

Overstaffing: Overstaffing is a common way that law firms can inflate legal bills. By staffing extra attorneys, it is possible for multiple attorneys to bill redundant and excessive hours for performing the same work. “[I]t is not reasonable to consistently bill a party for two attorneys to do the same work/review each other’s work.” Bell v. Prefix 2011 WL 1100090 at *8 (E.D.Mich. 2011); “After careful review of the billing records the court is left with the distinct impression that parts of this case are overlawyered…As a result, the court will…reduce the number of hours claimed by twenty-five (25) percent.” Kansas Penn Gaming, LLC v. HV Properties of Kansas, LLC, 2011 WL 1885853 at *8 (D.Kan. 2011). $10,950.00 of the billing entries reviewed represented overstaffing.

False Billing: False billing is an extremely unethical practice and falsely billed entries should never be compensated. Common indications of “false” billing are when attorneys record different time entries for the same meetings, which was present in the Borders’ billings. Such entries are often found to be recorded in error but, “[t]he Court will not credit billing errors that are plainly erroneous.” Fitts v. Unum Life Ins. Co. of America, 680 F.Supp.2d 38, 44 (D.D.C. 2010). $8,843 of the reviewed entries were arguably “false.”