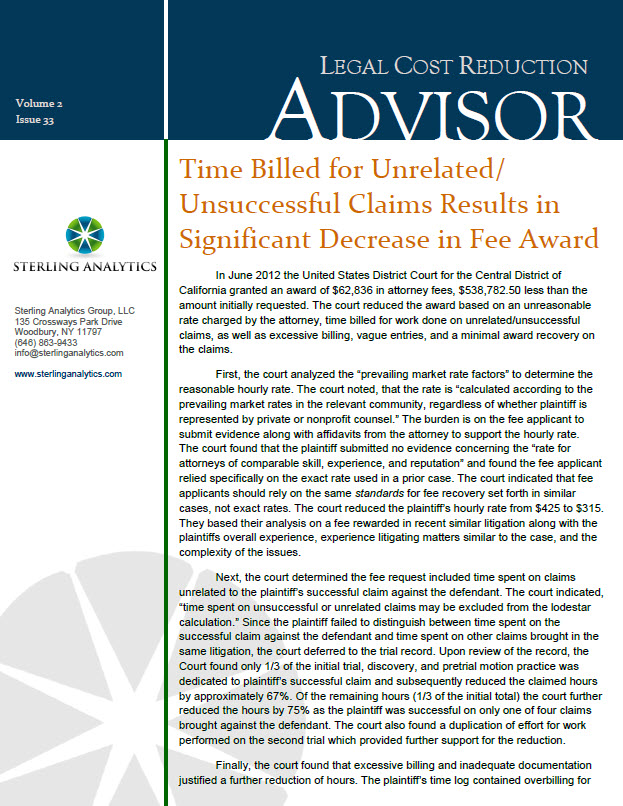 In June 2012 the United States District Court for the Central District of California granted an award of $62,836 in attorney fees, $538,782.50 less than the amount initially requested. The court reduced the award based on an unreasonable rate charged by the attorney, time billed for work done on unrelated/unsuccessful claims, as well as excessive billing, vague entries, and a minimal award recovery on the claims.

First, the court analyzed the “prevailing market rate factors” to determine the reasonable hourly rate. The court noted, that the rate is “calculated according to the prevailing market rates in the relevant community, regardless of whether plaintiff is represented by private or nonprofit counsel.” The burden is on the fee applicant to submit evidence along with affidavits from the attorney to support the hourly rate. The court found that the plaintiff submitted no evidence concerning the “rate for attorneys of comparable skill, experience, and reputation” and found the fee applicant relied specifically on the exact rate used in a prior case. The court indicated that fee applicants should rely on the same standards for fee recovery set forth in similar cases, not exact rates. The court reduced the plaintiff’s hourly rate from $425 to $315. They based their analysis on a fee rewarded in recent similar litigation along with the plaintiffs overall experience, experience litigating matters similar to the case, and the complexity of the issues.

Next, the court determined the fee request included time spent on claims unrelated to the plaintiff’s successful claim against the defendant. The court indicated, “time spent on unsuccessful or unrelated claims may be excluded from the lodestar calculation.” Since the plaintiff failed to distinguish between time spent on the successful claim against the defendant and time spent on other claims brought in the same litigation, the court deferred to the trial record. Upon review of the record, the Court found only 1/3 of the initial trial, discovery, and pretrial motion practice was dedicated to plaintiff’s successful claim and subsequently reduced the claimed hours by approximately 67%. Of the remaining hours (1/3 of the initial total) the court further reduced the hours by 75% as the plaintiff was successful on only one of four claims brought against the defendant. The court also found a duplication of effort for work performed on the second trial which provided further support for the reduction.

Finally, the court found that excessive billing and inadequate documentation justified a further reduction of hours. The plaintiff’s time log contained overbilling for numerous tasks including more than 8 hours spent on a 4 page ex parte application and 162 hours spent on the motion for fees. Furthermore, the time log included numerous vague entries including a failure to describe research performed. The court also instituted a $25,000 reduction in legal fees based on the minimal recovery in the action.

Implications for Legal Billing: This case reinforces the importance of providing evidence along with affidavits to support hourly rates charged. In the current case a reduction of $90 per hour was applied for failure to provide evidence of attorney experience, experience litigating similar matters, as well as complexity of the issues.

Failing to delineate time spent on successful versus unsuccessful claims or time spent on claims unrelated to the action can also lead to a significant decrease in the fee award. When the fee applicant fails to partition the claims, the court can rely on the trial record to determine the percentage of time spent on each claim and reduce the award accordingly. Multiple trials on the same issue can also result in a reduction if a duplication of effort is found.

Finally this case illustrates the importance of billing judgment. Excessive time spent on tasks and vague billing entries can result in a reduction of fees.