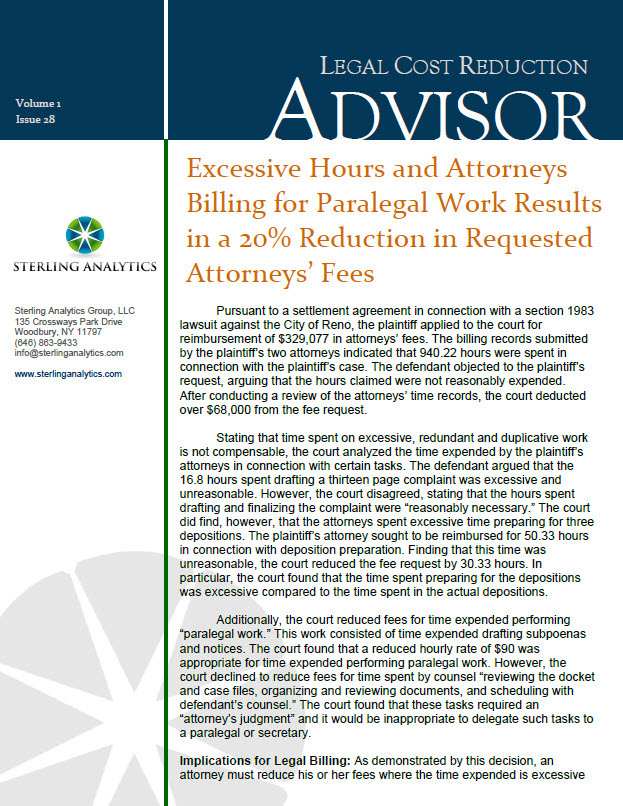 Stating that time spent on excessive, redundant and duplicative work is not compensable, the court analyzed the time expended by the plaintiff’s attorneys in connection with certain tasks. The defendant argued that the 16.8 hours spent drafting a thirteen page complaint was excessive and unreasonable. However, the court disagreed, stating that the hours spent drafting and finalizing the complaint were “reasonably necessary.” The court did find, however, that the attorneys spent excessive time preparing for three depositions. The plaintiff’s attorney sought to be reimbursed for 50.33 hours in connection with deposition preparation. Finding that this time was unreasonable, the court reduced the fee request by 30.33 hours. In particular, the court found that the time spent preparing for the depositions was excessive compared to the time spent in the actual depositions.

Additionally, the court reduced fees for time expended performing “paralegal work.” This work consisted of time expended drafting subpoenas and notices. The court found that a reduced hourly rate of $90 was appropriate for time expended performing paralegal work. However, the court declined to reduce fees for time spent by counsel “reviewing the docket and case files, organizing and reviewing documents, and scheduling with defendant’s counsel.” The court found that these tasks required an “attorney’s judgment” and it would be inappropriate to delegate such tasks to a paralegal or secretary.

Moreover, an attorney must exercise billing judgment with respect to paralegal and clerical tasks. Generally, paralegal work completed by an attorney must be compensated at a paralegal’s hourly rate. An attorney performing typical paralegal tasks cannot be compensated at his or her normal hourly rate. Furthermore, a court will typically disallow time spent performing clerical tasks as such tasks are part of a law firm’s overhead. However, the court in this decision declined to eliminate the time spent on tasks such as “organizing and reviewing documents.” Although reviewing is usually considered an attorney’s task, an attorney should not bill his or her client for time spent organizing documents. This results in the attorney billing for a task that he or she is clearly overqualified to perform. Although not explicitly stated, the court most likely considered the complexity of the issues involved in the case. The more complex the case, the more an “attorney’s judgment” will be required. However, it is important to note that the general rule prohibits an attorney from charging a client for time spent organizing documents.