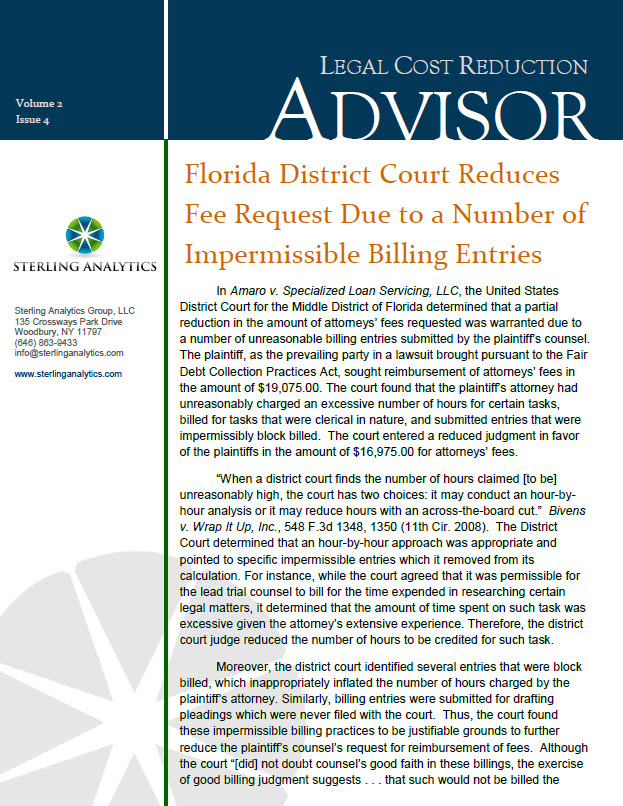 In Amaro v. Specialized Loan Servicing, LLC, the United States District Court for the Middle District of Florida determined that a partial reduction in the amount of attorneys’ fees requested was warranted due to a number of unreasonable billing entries submitted by the plaintiff’s counsel. The plaintiff, as the prevailing party in a lawsuit brought pursuant to the Fair Debt Collection Practices Act, sought reimbursement of attorneys’ fees in the amount of $19,075.00. The court found that the plaintiff’s attorney had unreasonably charged an excessive number of hours for certain tasks, billed for tasks that were clerical in nature, and submitted entries that were impermissibly block billed. The court entered a reduced judgment in favor of the plaintiffs in the amount of $16,975.00 for attorneys’ fees.

“When a district court finds the number of hours claimed [to be] unreasonably high, the court has two choices: it may conduct an hour-by-hour analysis or it may reduce hours with an across-the-board cut.” Bivens v. Wrap It Up, Inc., 548 F.3d 1348, 1350 (11th Cir. 2008). The District Court determined that an hour-by-hour approach was appropriate and pointed to specific impermissible entries which it removed from its calculation. For instance, while the court agreed that it was permissible for the lead trial counsel to bill for the time expended in researching certain legal matters, it determined that the amount of time spent on such task was excessive given the attorney’s extensive experience. Therefore, the district court judge reduced the number of hours to be credited for such task.

Moreover, the district court identified several entries that were block billed, which inappropriately inflated the number of hours charged by the plaintiff’s attorney. Similarly, billing entries were submitted for drafting pleadings which were never filed with the court. Thus, the court found these impermissible billing practices to be justifiable grounds to further reduce the plaintiff’s counsel’s request for reimbursement of fees. Although the court “[did] not doubt counsel’s good faith in these billings, the exercise of good billing judgment suggests . . . that such would not be billed the client nor should they be billed the opponent.”

Implications for Legal Billing: The implications of this case are readily apparent—legal bills are often impermissibly inflated by excessive billing entries. The practice of block billing groups together several distinct tasks without itemizing the time expended on each individual task. Engaging in this practice makes it difficult, if not impossible, for the client to determine whether or not the attorney’s time spent on each task was reasonable.

Furthermore, the number of hours spent on each task ought to be comparable to the attorney’s experience and the complexity of the task. If the number of hours far exceeds these qualifications, then the entry is deemed excessive and thus may be reduced to a reasonable amount.