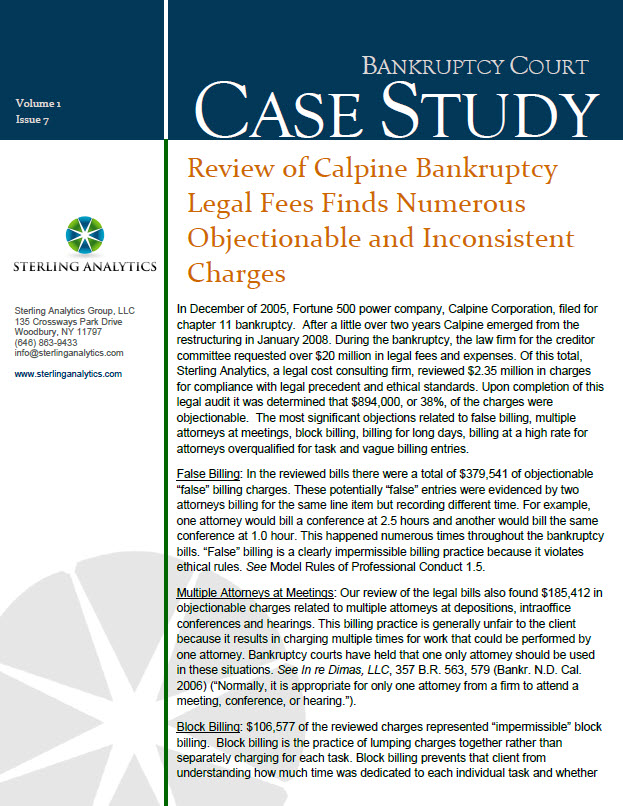 In December of 2005, Fortune 500 power company, Calpine Corporation, filed for chapter 11 bankruptcy. After a little over two years Calpine emerged from the restructuring in January 2008. During the bankruptcy, the law firm for the creditor committee requested over $20 million in legal fees and expenses. Of this total, Sterling Analytics, a legal cost consulting firm, reviewed $2.35 million in charges for compliance with legal precedent and ethical standards. Upon completion of this legal audit it was determined that $894,000, or 38%, of the charges were objectionable. The most significant objections related to false billing, multiple attorneys at meetings, block billing, billing for long days, billing at a high rate for attorneys overqualified for task and vague billing entries.

False Billing: In the reviewed bills there were a total of $379,541 of objectionable “false” billing charges. These potentially “false” entries were evidenced by two attorneys billing for the same line item but recording different time. For example, one attorney would bill a conference at 2.5 hours and another would bill the same conference at 1.0 hour. This happened numerous times throughout the bankruptcy bills. “False” billing is a clearly impermissible billing practice because it violates ethical rules. See Model Rules of Professional Conduct 1.5.

Multiple Attorneys at Meetings: Our review of the legal bills also found $185,412 in objectionable charges related to multiple attorneys at depositions, intraoffice conferences and hearings. This billing practice is generally unfair to the client because it results in charging multiple times for work that could be performed by one attorney. Bankruptcy courts have held that one only attorney should be used in these situations. See In re Dimas, LLC, 357 B.R. 563, 579 (Bankr. N.D. Cal. 2006) (“Normally, it is appropriate for only one attorney from a firm to attend a meeting, conference, or hearing.”).

Block Billing: $106,577 of the reviewed charges represented “impermissible” block billing. Block billing is the practice of lumping charges together rather than separately charging for each task. Block billing prevents that client from understanding how much time was dedicated to each individual task and whether each task reflected compensable work. Bankruptcy courts often reduce attorneys’ fee requests due to block billing. See In re Baker, 374 B.R. 489 (E.D.N.Y. 2007) (reducing entire bill by 20% due to improper block billing); In re New Towne Development Group, LLC, 2010 WL 1451480, at *5 (Bankr. M.D. La. 2010) (reducing fees by one-half for all lumped billing entries).

Billing for Long Days: Billing for double digit hours in one day is questionable and usually excessive. In the reviewed bills, $92,286 represented charges exceeding 10 hours a day. These included charges of up to 12.4 hours in one day and 56.9 hours over the course of 5 days. Bankruptcy courts have reduced attorney fee requests due to billing for long days. See In re New Boston Coke Corp., 299 B.R. 432, 448 (Bankr. E.D. Mich. 2003) (“Except in unusual circumstances it is not realistic for an attorney to bill in excess of six to seven hours per day . . . . While it is certainly possible that an attorney could bill ten-, nineteen- or twenty-hour days, it is unlikely that all of that billed time is compensable.”)

Billing for Attorneys Overqualified for Task: Hourly rates should be appropriate to the task being performed, not who is performing the task. Therefore if an attorney is overqualified for the task being billed, the task should only be compensated at the hourly rate appropriate for that task and not at the attorney’s full hourly rate. Courts have held that is unethical for attorneys to bill at their full rate for non-legal services. See In re Towns, 75 A.D.3d 93 (App. Div. 3rd Dep’t 2010). Of the reviewed bills it was determined that $65,964 in charges were billed at an “improper” rate for the task. A particularly egregious example was a partner billing at a $725 hourly rate for “review and organize project summaries”.

Vague Billing Entries: Vague entries are arguably impermissible because they prevent the client from adequately understanding what work was performed. $65,964 of the reviewed charges were “overly vague.” Examples of such “vague” entries in the Calpine bankruptcy bills include “research”, “emails” and “respond to inquiries”. Billings containing vague entries are “routinely disallowed” by bankruptcy courts. In re Hirsch, 2008 WL 5234057, at *7 (Bankr. E.D.N.Y. 2008).

* In re Calpine Corporation, et al.